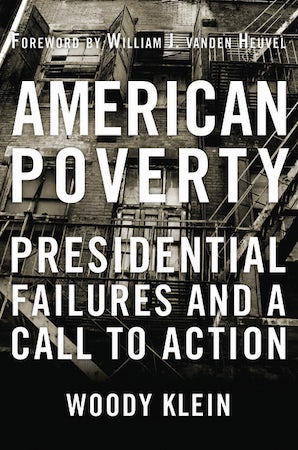 Presidential Failures and a Call to Action

Poverty has been a fact of American life since the nation’s founding; every American president has faced this scourge during his administration in one way or another. Whether bound up in the problems of slavery, immigration, or the recent financial and housing crises, the cycle of poverty has bedeviled presidents, policymakers, legislators, and scholars for more than two centuries. Yet poverty is increasing, not disappearing. One out of three Americans is now living at or below the poverty line, according to recent studies. How did this happen?Woody Klein explores the anti-poverty programs—or lack thereof—during each successive administration, explaining how and why no president thus far has been able to end poverty. American Poverty urges the president and Congress to work together to finally eradicate poverty in America.Poverty is the Achilles’ heel of our national and economic security, Klein asserts. Unless the chasm between rich and poor can be bridged, America will never live up to its full potential as the most successful democracy on earth. Will the White House answer the call?

“‘American’ and ‘poverty’ are words that should not appear in the same sentence. We’re the wealthiest country in the world; that we should have poverty at all is oxymoronic. Woody Klein’s book offers an in-depth historical perspective on why we are still battling poverty.”—Peter Edelman, professor of law, Georgetown University Law Center; faculty director, Center on Poverty, Inequality, and Public Policy; and author of So Rich, So Poor
“Woody Klein’s ‘call to action’ could not have come at a more propitious moment. His purpose—to put poverty back on the front pages of every magazine, newspaper, and other media outlet in America—is noble. His pedigree as one of the nation’s top investigative reporters could not be more appropriate.”—Victor Navasky, publisher emeritus and former editor, The Nation
“The occasion for Woody Klein’s clarion call to arms is the fiftieth anniversary of Michael Harrington’s famous 1962 volume The Other America, which galvanized Kennedy’s administration, and more so Johnson’s, to mount the most significant assault on American poverty since Roosevelt’s New Deal in the 1930s. Klein’s book is a clear-eyed estimation of where we are in the treatment of America’s neediest and where we need to go. It brings Harrington’s book up to date—with vision, imagination, and sound reporting.”—Neil Hickey, former editor at large, Columbia Journalism Review
“I knew Woody Klein when he was a crusading and courageous reporter for the old New York World-Telegram & Sun. He has done an extraordinary job in looking back at how presidents of our country have addressed the problem of poverty in our society, and he has eloquently reminded us that despite our great economic success, we still have a significant number of very poor people whose issues have to be addressed.”—Richard Ravitch, former lieutenant governor of New York and a nationally known expert on housing and urban poverty