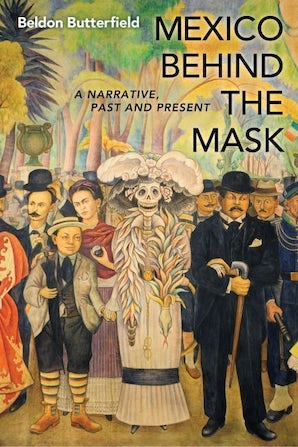 Mexico Behind the Mask

A Narrative, Past and Present

In light of current events related to immigration issues, the drug war along the border, and the North American Free Trade Agreement, Beldon Butterfield's insightful and informative history of the complex relationship between Mexico and the United States is both timely and useful.

Butterfield went to Mexico with Time Inc. in 1962 and has lived there ever since, enabling him to provide a unique perspective on the country's history and culture. He traces Mexico's tangled history from the early arrival of the Aztecs to their fall at the hands of Hernán Cortés, from the Mexican Revolution to the disastrous agrarian reform measures, and from Mexico's standing as one of the wealthiest countries in the world to its status, until recently, as a member of the third world.

Mexico's relationship with the United States is a key aspect of its culture. Many cultural barriers between the two countries are breaking down in spite of lingering resistance by both countries and differing perspectives of their common border. While Mexicans cannot forget that the border symbolizes the scar of an unjust war, Americans resent how millions of Mexicans cross it illegally in their quest for work.

The good news, Butterfield writes, is that Mexico is changing despite the continued opposition of political forces that want to maintain their unchecked power of the past. Mexico Behind the Mask shows how the road to a more prosperous Mexico seems to be on course.

BELDON BUTTERFIELD, who was born and raised in Argentina but attended school in the United States, has represented the Financial Times and BusinessWeek in Mexico for more than twenty years. He has also published two novels in Mexico: The Crystal Bull (with Bruce Zimmerman) and The Line/La Línea. He lives in San Miguel de Allende, Mexico.

“The author has combined Mexican history with his own experiences across many years of living in Mexico. A well-informed book, especially as it pertains to my time in Mexico as ambassador.”—James Jones, U.S. ambassador to Mexico, 1993–1997
“A good read if Americans are to better understand their next door neighbor.”—George W. Grayson, professor of government, College of William & Mary, and author of Mexico: Narco-Violence and a Failed State?
“Butterfield confirms the issue that illegal drugs are an integral part of American culture and the economy of Mexico. Bravo for a story well told that follows today’s headlines.”—Jorge Fernández Menéndez, author of The Enemy at Home: Drugs and Drug Dealing in Mexico
“This book is a must read for any American wanting to do business in Mexico, become an expat, or simply visit. Butterfield brings a seldom-heard balanced view of heroes and villains across centuries of Mexican history. He also has the ability to not take sides when it comes to the relations between Mexico and the United States. To appreciate this complicated relationship between neighbors, it is only possible by understanding the past.”—Alfonso Cortina, former director, The Economist Peer Forum in Mexico, and president, The Pinnacle Group
“An exciting read for anyone who's the least bit interested in Mexico. It could become the standard for the 22 million Americans and other foreigners who visit every year.”—Clifford Irving, author of Tom Mix and Pancho Villa