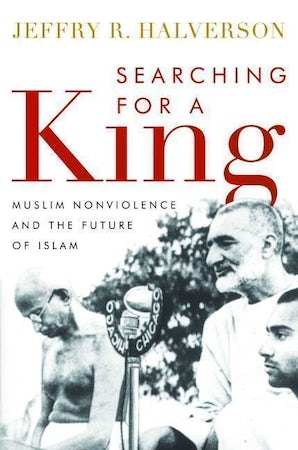 Searching for a King

Muslim Nonviolence and the Future of Islam

At a time when violent images of the Muslim world dominate our headlines, Western audiences are growing increasingly interested in a different picture of Islam, specifically the idea of Muslim nonviolence, and what it could mean for the world. But is nonviolence compatible with the teachings of Islam? Is it practical to suggest that Muslim societies must adopt nonviolence to thrive in today’s world? Where is the Muslim equivalent of a Mohandas K. Gandhi or Martin Luther King Jr.? Searching for a King offers a comprehensive look into Islamic conceptions of nonviolence, their modern champions, and their readings of Islam’s sacred texts, including the Qur’an and traditions of the Prophet Muhammad.Jeffry R. Halverson asserts that the foundation for nonviolence in Islam already exists. He points to the exemplary lives and teachings of modern Muslim champions of nonviolence, including Abdul Ghaffar Khan, an ethnic Pashtun from the tribal regions of Pakistan whose 100,000 Muslim followers peacefully resisted British colonial rule in India. Using rich historical narratives and data from leading NGOs and international governmental organizations, Halverson also makes the case that by eliminating the high costs of warfare, nonviolence opens the door to such important complementary initiatives as microfinancing and women’s education programs. Ultimately, he endorses Muslim conceptions of nonviolence and argues for the formulation of a nonviolent version of jihad as an active mode of social transformation.

Jeffry R. Halverson is an associate professor of religious studies in the Department of Philosophy and Religious Studies at Coastal Carolina University (SC). He previously served as an assistant research professor at Arizona State University. As a scholar of Islamic studies and the history of religions, Halverson is the author of Theology and Creed in Sunni Islam (Palgrave Macmillan 2010), Searching for a King: Muslim Nonviolence and the Future of Islam (Potomac, 2012), and lead author of Master Narratives of Islamist Extremism (Palgrave Macmillan 2011) and Islamists of the Maghreb (Routledge 2017). His scholarship has also been published in several academic journals, including The Muslim World and The Journal of Communication. He has written about Islam and Islamophobia for Salon and his work has been cited by CNN, al-Jazeera English, Public Radio International, The Globe and Mail, Religion News, ASU News, and others. His debut novel, The Mural, was self-published in 2014.

“Jeffry Halverson has written a book of extreme importance for our times. Searching for a King is a well-researched, meaningful, and much-needed volume that convincingly rebuts a narrative of violence that has for too long dominated discussions of Islam and Muslims. Offering a glimpse into the lives and works of five champions of peace, he reveals hidden beautiful teachings and unsung courageous acts that tell a different, inspiring story. Anyone who values peace and desires more equality in the world owes it to himself or herself to read this book.”—Nathan Lean, author of The Islamophobia Industry: How the Right Manufactures Fear of Muslims
“The inspiring, informative, and well-documented narratives of Muslim champions of nonviolence presented in Searching for a King make a coherent and powerful case for Islamic nonviolence today.”—Abdullahi Ahmed An-Na'im, professor at Emory Law School and author of Islam and the Secular State