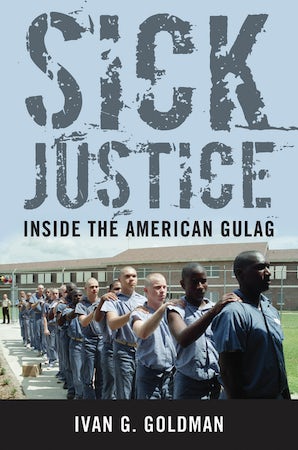 Inside the American Gulag

In America, 2.3 million people—a population about the size of Houston’s, the country’s fourth-largest city—live behind bars. Sick Justice explores the economic, social, and political forces that hijacked the criminal justice system to create this bizarre situation. Presenting frightening true stories of (sometimes wrongfully) incarcerated individuals, Ivan G. Goldman exposes the inept bureaucracies of America’s prisons and shows the real reasons that disproportionate numbers of minorities, the poor, and the mentally ill end up there. Goldman dissects the widespread phenomenon of jailing for profit, the outsized power of prison guards’ unions, California’s exceptionally rigid three-strikes law, the ineffective and never-ending war on drugs, the closing of mental health institutions across the country, and other blunders and avaricious practices that have brought us to this point. Sick Justice tells a big, gripping story that’s long overdue. By illuminating the system’s brutality and greed and the prisoners’ gratuitous suffering, the book aims to be a catalyst for reform, complementing the work of the Innocence Project and mirroring the effects of Michael Harrington’s The Other America: Poverty in the United States (1962), which became the driving force behind the war on poverty.

IVAN G. GOLDMAN is the New York Times–best-selling author of four novels, including Isaac: A Modern Fable (The Permanent Press, 2012), and one nonfiction book, L.A. Secret Police: Inside the LAPD Elite Spy Network, with Mike Rothmiller (Pocket, 1992), a book that prompted the department to padlock its intelligence division. He has covered Congress for the Washington Post, worked the national and foreign desks of the Los Angeles Times, and was an editorial writer for the Seattle Post- Intelligencer. His articles have appeared in the Columbia Journalism Review, The Nation, Rolling Stone, and the New York Times, and he blogs about current events at www.ivangoldman.blogspot.com. He lives in Rancho Palos Verdes, California.

“An eye-opening and compelling critique of the American criminal justice system.”—Marc Schuster, author of The Grievers
“Ivan Goldman takes the academic literature and does it one better. He not only explains the roots and results of America’s overincarceration problem in an understandable way, but he also puts a human face on the issue by telling the story through the lived experiences of real people unlucky enough to have witnessed the workings of the criminal justice system firsthand.”—Neill Franklin, executive director, Law Enforcement Against Prohibition, and thirty-four-year veteran of Baltimore-area policing
“Sick Justice should be required reading in every law school and police academy in America. This is an important book.”—Neal Griffin, author and veteran San Diego County, California, police lieutenant
“With deep reporting and crisp analysis, Ivan Goldman has written an important expose of a dysfunctional system that is a disgrace to the ideals America claims to cherish.”—Michael Satchell, former senior editor, U.S. News & World Report
"Succinct . . . damning . . . compelling."—Karl Wolff, CCLaP