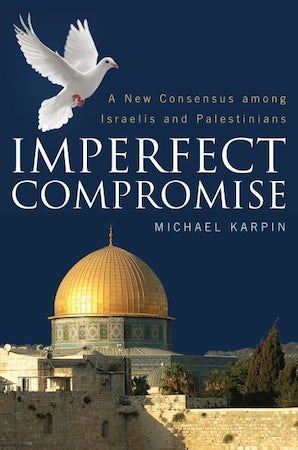 A New Consensus among Israelis and Palestinians

The Middle East is now in the eye of a storm. But as this storm abates, an opportunity for peace and progress has emerged. The Egyptian revolution against Hosni Mubarak’s regime may usher in an era of relative freedom in the Middle East, notwithstanding Syria’s brutal crackdown on its own domestic opposition. Michael Karpin, an Israeli broadcast journalist, argues that the triumph of any nonviolent struggle in the region, no matter how rare, has the potential to increase the desire among Israelis and Palestinians for a peaceful solution to their differences.In Imperfect Compromise, Karpin presents an entirely different thesis from that of most books about the Middle East peace settlement: when it comes to the proverbial man or woman on the street, he asserts that both Arabs and Jews prefer a peaceful solution. The question is whether and when the leaders on both sides will be capable of overcoming the fanatical minorities that torpedo each attempt to arrive at any agreement.The forces opposed to a peace settlement are weakening, public opinion is more open to compromise than the leaders are, and the principles of a final settlement have been developed, Karpin explains. These principles need to be adopted, and Karpin demonstrates that there is no better time than the present.

Michael Karpin (born 1945; lives in Tel Aviv) is a journalist, author of non-fiction books and director/producer of TV documentaries.
For 25 years Karpin was television and radio news reporter, anchor, and TV Channel One's bureau chief in Bonn (1976-80) and Moscow (1991-92); Chief News Editor (1983-86) and editor and presenter of his network's flagship program, "Second Look" (1986-90 and 1993-95).
Karpin's books and documentaries were instrumental in exposing two of Israel's most controversial issues: Dimona's nuclear activities and the incitement campaign that preceded the assassination of Prime Minister Yitzhak Rabin. In 1983, Karpin broke the story of Israel's secret service fabrication of evidence in the course of Bus Line 300's investigation.

“A sensitive and sober analysis, Imperfect Compromise achieves the remarkable. Karpin’s clear prose lays bare the multiple perspectives that shape the current unforgiving pass to which Israelis and Arabs have come. That alone is a signal accomplishment. But Karpin does more: he offers hope. And that is extraordinary.”—Debórah Dwork, professor of history, Rose Professor of Holocaust History, director of the Strassler Center for Holocaust and Genocide Studies