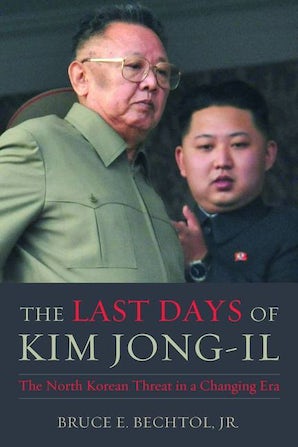 The Last Days of Kim Jong-il

The North Korean Threat in a Changing Era

North Korea has remained a thorn in the side of the United States ever since its creation in the aftermath of the Korean conflict of 1950–1953. Crafting a foreign policy that effectively deals with North Korea, while still ensuring stability and security on the Korean Peninsula—and in Northeast Asia as a whole—has proved very challenging for successive American administrations. In the wake of ruler Kim Jong-il’s death in December 2011, analysts and policymakers continue to speculate about the effect his last years as leader will have on the future of North Korea.

Bruce Bechtol, Jr. contends that Kim Jong-il’s regime (1994–2011) exacerbated the threats that North Korea posed, and still poses, to the world. Bechtol explains how North Korea presents important challenges on five key fronts: its evolving conventional military threat, its strategy in the Northern Limit Line (NLL) area, its nuclear capabilities, its support for terrorism, and its handling of the succession process.

Bechtol’s analysis clears up the persistent mystery of how Kim Jong-il’s dysfunctional government in its final years was able to persist in power while both presenting a grave danger to its neighbors and setting the stage for the current government. This work addresses issues important for policymakers and academics who must deal with those in power in North Korea.

BRUCE E. BECHTOL JR. is an associate professor of political science at Angelo State University. Formerly a senior intelligence analyst at the Defense Intelligence Agency, he is currently on the editorial advisory board of the Korea Observer. He also serves as the president of the International Council on Korean Studies and sits on the board of directors of the Council on U.S.-Korean Security Studies. His most recent book is Defiant Failed State: The North Korean Threat to International Security (Potomac Books, 2010). He lives in San Angelo, Texas.

"[The Last Days of Kim Jong-Il] offers a useful source of information for a wide range of readers interested in the recent and current security problems of the Korean Peninsula."—Balazs Szalontai, Korean Studies
“Bruce Bechtol provides a realist’s assessment of a barricaded and dangerous Kim regime holding North Korea’s population hostage. It threatens the region with massive conventional firepower, missile programs and nuclear weapons. It sells the most dangerous materials around the world. This is not a normal country amenable to conventional diplomacy.”—Lt. Gen. Wallace “Chip” Gregson, USMC (Ret.), former assistant secretary of defense, Asian and Pacific Security Affairs
“The Last Days of Kim Jong-il is a must read for scholars, strategists and policymakers, and the general public. To understand where North Korea is going it is critical to know where it has been. From the nuclear and missile program to conventional military threats, provocations, and terrorism to the political dynamics of the regime, this book provides important military and political insights that, as events play out on the Korean peninsula, will provide the rock solid foundation for effective policy and strategy development.”—David S. Maxwell, associate director, Center for Security Studies & Security Studies Program, Edmund A. Walsh School of Foreign Service, Georgetown University
“Bruce Bechtol delivers a commanding analysis of a regime that continues to puzzle connoisseurs and intrigue neophytes. As the international community continues to struggle with seeking answers to the conundrum of North Korea’s resilient hereditary dictatorship, relentless threats to world peace and stability, and egregious human rights violations, Bruce Bechtol’s book provides solid answers to the critical questions of today and tomorrow. This is Bechtol at his best: captivating, authoritative, insightful, and foretelling.”—Greg Scarlatoiu, executive director, Committee for Human Rights in North Korea (HRNK)
“Here, the author displays an admirable command of available information and speculation in reviewing and assessing the complex political-military situation in North Korea today, the threats North Korea poses for the United States and ROK in the future, and what those allies have been doing to offset the threats. Clear and concise, careful and authoritative—in this timely and at times provocative book he expands our knowledge of one of the world’s most dangerous regimes.”—Patrick Morgan, Tierney Chair, Peace & Conflict, Political Science, School of Social Sciences, University of California–Irvine