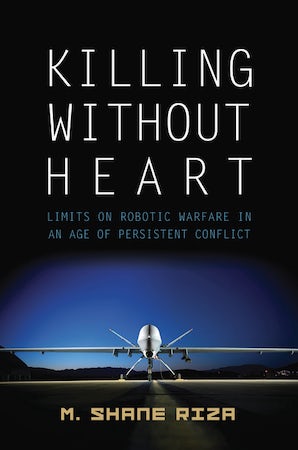 Limits on Robotic Warfare in an Age of Persistent Conflict

The days of large force-on-force engagements with conventional fielded armies are seemingly gone. Today’s persistent conflict, conducted among civilian populations and fought by small bands of combatants, will be remembered for this alteration in the tapestry of war and for the first large-scale use of unmanned vehicles. According to M. Shane Riza, this “war among the people” and the trend toward robotic warfare has outpaced deliberate thought and debate about the deep moral issues affecting justice and the warrior spirit. The pace of change, Riza explains, is revolutionizing warfare in vitally important ways. A key development is risk inversion, a shifting of risk away from technologically superior combatants and onto all noncombatants. For the first time in history, warriors are not the ones primarily shouldering the dangers and horrors of battle. This inversion and the search for impunity undermine the idea that how we win actually matters as much as winning itself. Though warfare involves human fallibility, there are ethics in striving that give meaning to war on a personal level. In just war theory, this sense of purpose imposes a practical limit on what belligerents can and should do to their opponents. Contemporary robotic warfare, however, may remove combatants’ moral equivalence and it adversely affects the mutual respect upon which to build a lasting peace. Killing without Heart postulates today’s technological wars of combatant impunity may ultimately render unmanned weapons useless with the realization that robotic lethality undermines our strategic objectives. Riza has crafted a timely examination of the moral, ethical, and legal implications of the U.S. military’s future course toward armed unmanned and autonomous robotic warfare. This is a book that will change the way we look at warfare—both for today and well into the future.

M. Shane Riza is a command pilot and a graduate of, and former instructor at, the U.S. Air Force Weapons School. A veteran of Operations Southern and Northern Watch, he commanded a fighter squadron during Operation Iraqi Freedom. He holds three master’s degrees, the most recent in national resource strategy from the National Defense University. He divides his time between his current assignment, his home state of Texas, and the north Georgia mountains. For more information, visit www.shaneriza.com

"Killing without Heart is a book that any policy maker and national decision maker should pick up and read to better be informed on the morality of unmanned and autonomous weapons systems."—Daniel P. Sukman, Strategos
"The controversy surrounding the use of drones and other unmanned weapons systems grows daily, and Shane Riza's Killing Without Heart is a critical addition to the debate. Few authors integrate the concerns of ethics, law, military operations, and national security policy as well as this fighter pilot in the U.S. Air Force. At a time when the United States is turning to such weapons to minimize casualties, especially its own, and diminish public unease with war, Riza makes a call of conscience to the public and policymakers. He reminds them war is a matter of death and the ability to use violent force so selectively with little human involvement may make it more tempting to use. Killing with impunity, real or perceived, has political, legal, and moral consequences for the attacker that should not be ignored—particularly in a democracy that claims effective civilian control of the military and full accountability for its decisions. War, Shane Riza reminds us, ultimately must be a human act because of its demand for life. Anything less, regardless of technological sophistication, may be a step backwards. This is a book senior civilian and military leaders must read, and it deserves equal attention from academics and others who concern themselves with national security. It will be hard to find a clearer explanation of the issues and what is at stake."—KEN MOSS, professor, Eisenhower School for National Security and Resource Strategy, and author of Undeclared War and the Future of U.S. Foreign Policy
"An important and timely work about a phenomenon that technological advances are making ever more possible: the deployment of autonomous weapons systems. Concerned with the ease with which America now uses lethal force with impunity, Riza raises essential ethical, moral, legal, and operational questions that civilian policymakers, military officials, and citizens should consider before the United States fields killer robots. An excellent book."—MICAH ZENKO, Council on Foreign Relations and author of Between Threats and War: U.S. Discrete Military Operations in the Post-Cold War World
"In an unusually articulate, well-organized, and brilliantly written book, Shane Riza implores us not to be seduced by technology but to search our hearts and minds and make moral and objective decisions about robotic systems in military operations. Using his experiences as an air warrior, his training in moral reasoning and his gift for scientific research, he has produced a highly readable book that will appeal to the profession of arms, to the moral philosopher, and to the government policymaker. The real value here is the articulate basis for classroom discussion on the moral dilemma of our time. The unique organization, nuanced articulation of complex ideas, and interdisciplinary thought process are trailblazing. This is a book that one cannot put down—its contents will haunt you. A work that will be well and repeatedly used by those studying the ramifications of robotic warfare."—WILLIAM G. ECKHARDT, U.S. Army Colonel (Ret.), Judge Advocate Corps, and chief My Lai prosecutor; University of Missouri, Kansas City Teaching Professor of Law
"'The sweat from the fear of death has a smell all its own…' You won’t read another book on robotics and warfare quite like this one. Col. Shane Riza joins the sparse ranks of fighter pilots who ruminate – and write about it. All the intellectual content is here, with plenty of just war theory and Hiroshima and Xenophon peppered in alongside the Predators and Hellfires. What’s so unusual about Killing Without Heart is how Riza turns his own experience of war, family, and matters of the heart into an extended essay on morality, autonomy and the necessary hesitation of the trained killer. His insights make for a unique take on how unmanned vehicles affect morality in war. Riza asks hard questions. Will unmanned warfare once and for all destroy any vestige of a warrior ethos in technologically advanced militaries? Does automated warfare remove the sense of the tragic and alter our understanding of the essence of war? Will robotic warfare accelerate the demise of the warrior spirit, or force a new understanding of this ancient concept? Riza’s questions make you think. Much of his argument pivots around risk and gut feeling. And he knows true risk first-hand: how to stifle it in the fighter cockpit over Iraq, and how its memory intrudes in the quiet moments, like early morning goodbyes or when tucking his children into bed. Fighter pilots with 'the right stuff' oh so rarely put pen to paper. Be glad Riza followed his heart to produce this book."—REBECCA GRANT, Washington Security Forum, former director of the General Billy Mitchell Institute for Air Power Studies, and frequent contributor to Air Force Magazine