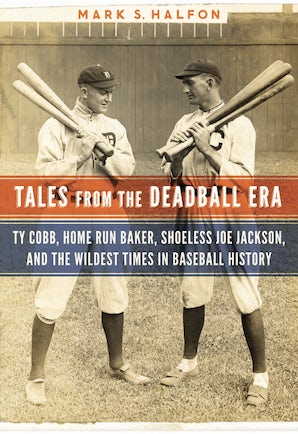 Tales from the Deadball Era

The Deadball Era (1901–1920) is a baseball fan’s dream. Hope and despair, innocence and cynicism, and levity and hostility blended then to create an air of excitement, anticipation, and concern for all who entered the confines of a major league ballpark. Cheating for the sake of victory earned respect, corrupt ballplayers fixed games with impunity, and violence plagued the sport. Spectators stormed the field to attack players and umpires, ballplayers charged the stands to pummel hecklers, and physical battles between opposing clubs occurred regularly in a phenomenon known as “rowdyism.”

At the same time, endearing practices infused baseball with lightheartedness, kindness, and laughter. Fans ran onto the field with baskets of flowers, loving cups, diamond jewelry, gold watches, and cash for their favorite players in the middle of games. Ballplayers volunteered for “benefit contests” to aid fellow big leaguers and the country in times of need. “Joke games” reduced sport to pure theater as outfielders intentionally dropped fly balls, infielders happily booted easy grounders, hurlers tossed soft pitches over the middle of the plate, and umpires ignored the rules. Winning meant nothing, amusement meant everything, and league officials looked the other way.

Mark Halfon looks at life in the major leagues in the early 1900s, the careers of John McGraw, Ty Cobb, and Walter Johnson, and the events that brought about the end of the Deadball Era. He highlights the strategies, underhanded tactics, and bitter battles that defined this storied time in baseball history, while providing detailed insights into the players and teams involved in bringing to a conclusion this remarkable period in baseball history.

Mark S. Halfon is professor of philosophy at Nassau Community College in New York. He has published work in various scholarly journals and written two books on moral philosophy. He is the author of Can a Dead Man Strike Out? Offbeat Baseball Questions and Their Improbable Answers.

"Halfon transports his readers back to that time, giving them an inside look at the minds of the baseball legends of that day. Tales From The Deadball Era is highly recommended for baseball history buffs."—The Writer's Journey

"For anyone interested in baseball's past, Halfon's Tales from the Deadball Era provides an introduction not only to the sport itself but to American culture as well."—Matthew Teutsch, ARETE

"If you're looking for a fun summer read I highly recommend Halfon's Tales From the Deadball Era."—Mike Lynch, Seamheads

"Most fans will enjoy reading this book and spending the time traveling back to these decades long ago."—Gregg Kersey, Gregg's Baseball Bookcase

“Tales from the Deadball Era etches early twentieth-century baseball far different from today’s. Fixed games, patrons on the diamond, and players belting hecklers were all in a day’s work. So, too, were cash and flowers given regulars, ‘joke’ and charity games, and a batter willingly getting hit—anything for a run. In this delightful book about Ty Cobb’s and John McGraw’s era, Mark Halfon recalls an age when baseball has seldom been more alive.”—Curt Smith, author of Pull Up a Chair: The Vin Scully Story

“It strikes baseball enthusiasts today that a homer or strikeout approach to tallying runs prevails. Not during the Deadball Era. Mark Halfon shows us—with a historian’s eye and unfailing love of the game—how [the scarcity of baseballs in pre-1920] was the mother of invention.”—Ken Shouler, author of The Real 100 Best Players of All Time and Why

“Mark Halfon captures a raucous era in baseball history, when the sport was characterized by cheating, gambling, and violence—on the part of both players and their fans—and he recounts intriguing tales of baseball’s mythical figures.”—Ronna S. Feit, PhD, State University of New York