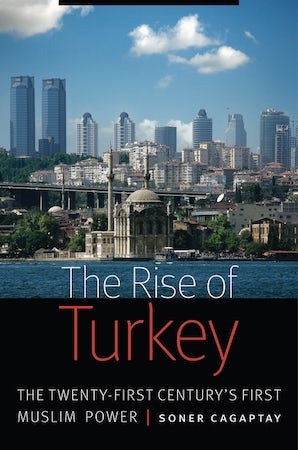 The Rise of Turkey

Turkey, which has always held an important position in global affairs, has become even more prominent on the international stage as an economic power and a harbinger of political Islam.

During more than ten years in power—an unprecedented tenure—Prime Minister Recep Tayyip Erdogan and his Islamist Justice and Development Party (AKP) have expanded Turkey’s trade, diplomatic ties, and cultural exports to transform the country from an economically disadvantaged secular state into the first large Muslim nation with a middle-class majority. Erdogan has asserted Turkish influence in high-stakes, high-profile foreign issues from Gaza to Egypt to Syria, often breaking ranks with his NATO allies. Today, from the cafés of the Arab world to the boardrooms of the G-20, Turkey suddenly matters.

The Rise of Turkey: The Twenty-First Century’s First Muslim Power is a guide to the country’s changes, both in its inspiring national potential and in the grave challenges it poses to regional affairs. Structured as a travelogue, each chapter opens on a different Turkish city and captures a new theme of Turkey’s transformation. From the Kurdish issue to foreign policy, Soner Cagaptay argues that Turkey needs to successfully balance its Muslim identity with its Western orientation in order to solidify its position as a regional and global power.

SONER CAGAPTAY is the Beyer Family fellow and director of the Turkish Research Program at The Washington Institute. A historian by training, Dr. Cagaptay has written extensively on U.S.-Turkey relations, Turkish domestic politics, and Turkish nationalism. He has taught courses at Yale University, Princeton University, Georgetown University, and Smith College on the Middle East, Mediterranean, and Eastern Europe. From 2006 to 2007 he was Ertegun Professor at Princeton University’s Department of Near Eastern Studies. Dr. Cagaptay’s work has been published regularly in scholarly journals and in major international print media, including the New York Times, Washington Post, and the Wall Street Journal. He has been a regular columnist for CNN-GPS and Hürriyet Daily News, Turkey’s oldest and most influential English-language paper, and he appears frequently on radio and television in the United States and abroad.

"The Rise of Turkey is undoubtedly an essential read for anyone interested in developing a serious understanding of modern Turkey."—Reza Akhlaghi, Foreign Policy Association

"Cagaptay does an excellent job in outlining the challenges and choices that confront contemporary Turkey."—H. Shambayati, CHOICE

"[The Rise of Turkey is] a good and thorough overview of the issues facing Turkey today."—Marion James, Today's Zaman
“For anyone interested in the complex developments that are reshaping Turkey, Dr. Soner Cagaptay’s insightful new book is the place to start. The Rise of Turkey provides a valuable window into the many factors—from economics and religion to politics and the military—that continue to make Turkey one of the most fascinating and important countries in the world.”—U.S. Sen. John McCain
“Dr. Soner Cagaptay is an extraordinary observer of Turkey, and his book, The Rise of Turkey, offers a wealth of insights for both interested observers and specialists alike. . . . For anyone interested in Turkey and American policy toward it, this book should be required reading.”—Ambassador Dennis Ross, former special assistant to President Barack Obama and National Security Council senior director
“Dr. Soner Cagaptay peels back the many layers that make Turkey such a fascinating and important country. With his deep understanding of Turkey, he is able to explore the political, cultural, and economic factors that have shaped its remarkable history and that may foreshadow its future.”—Joseph Lieberman, former U.S. senator

Introduction: Rising Turkey and Its Challenges

3. The Military Gets on Board

4. Is Turkish Power Myth or Reality?

8. Is There Room for Turkey in the West?