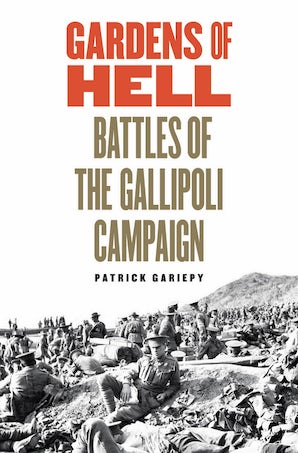 Battles of the Gallipoli Campaign

Gardens of Hell examines the human side of one of the great tragedies of modern warfare, the Gallipoli campaign of the First World War. In February 1915, beginning with a naval attack on Turkey in the Dardanelles, a combined force of British, Australian, New Zealand, Indian, and French troops invaded the Gallipoli Peninsula only to face crushing losses and an ignominious retreat from what seemed a hopeless mission. Both sides in the battle suffered huge casualties, with a combined 127,000 servicemen killed during the action.

Patrick Gariepy has pieced together the battle from combatants’ own words. Drawn from diaries and letters and from stories passed down through generations of families, these firsthand accounts offer an honest, heartfelt, and sometimes painful testimony to a doomed campaign fought by the men who lived through the fury, terror, and grief that was Gallipoli. Gardens of Hell is a sensitive acknowledgment of the enormous human cost of military folly and failure.

PATRICK GARIEPY (1963–2012) served in the U.S. Army in Military Intelligence and as a German interpreter. He spent twenty-six years gathering information from families of men who had died at Gallipoli, as well as from numerous archives. His work has been featured on National Public Radio’s Weekend Edition and on television and radio programs across the United States, Australia, and New Zealand.

List of Illustrations
Acknowledgments
Introduction: The Road to Gallipoli
1. “A Day Which I Shall Not Forget”: The Battle Is Joined
2. “The Results Were Disastrous”: Forcing the Dardanelles
3. “Death on the Eve of Battle”: The Preparations
4. “My God It’s All Horrible”: The Landings of April 25, 1915—Anzac
5. “This Place Was Littered with Dead from the Boats”: The Landings of April 25, 1915—Helles
6. “Had We Gone Forward We Should Have Been Wiped Out”: The Battles of April—Helles
7. “They Died like Gallant Officers and Gentlemen”: The May Battles
8. “A Lot of Our Poor Fellows Were Drowned”: The War at Sea
9. “We Had the Great Experience to Have a Glimpse of Hell”: The June Battles
10. “There Was No One Left to Fire”: Battles of August and the Final Offensives
11. “Not Actually All the King’s Men”: The Battles of July 12 and August 12
12. “And All Suffered Severely”: The Great Storm, November 27–28, 1915
13. “We Have Lost the Game”: Evacuation
Notes
Bibliography
Index