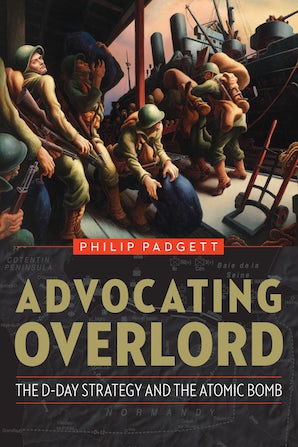 The D-Day Strategy and the Atomic Bomb

“Well there it is. It won’t work, but you must bloody well make it,” said the chief of Britain’s military leaders when he gave orders to begin planning for what became known as Operation Overlord. While many view D-Day as one of the most successful operations of World War II, most aren’t aware of the intensive year of planning and political tension between the Allies that preceded the amphibious military landing on June 6, 1944. This intriguing history reveals how President Franklin D. Roosevelt, while on a fishing trip in the middle of World War II, altered his attitude toward Winston Churchill and became an advocate for Operation Overlord.

Philip Padgett challenges the known narrative of this watershed moment in history in his examination of the possible diplomatic link between Normandy and the atomic bomb. He shows how the Allies came to agree on a liberation strategy that began with D-Day—and the difficult forging of British and American scientific cooperation that produced the atomic bomb. At its core this story is about how a new generation of leaders found the courage to step beyond national biases in a truly Allied endeavor to carry out one of history’s most successful military operations.

Philip Padgett spent forty years working in national security and preparedness analysis in the military, government, and the private sector. As deputy intelligence adviser at the U.S. Arms Control and Disarmament Agency, he supported negotiations for five international treaties and agreements. On contract, he has led integrated analyses for studies of the East-West military balance, nuclear doctrine and deterrence, NATO command and control, and arms control compliance monitoring. In his retirement Padgett joined the Federal Emergency Management Agency’s Reserve Corps and assisted in national emergencies such as Superstorm Sandy. For more information about Advocating Overlord, visit philpadgett.com/.

"Advocating Overlord is a welcome reminder of what can be accomplished when allied nations' military and political leaders overcome national biases and rivalries to recognize common interests."—Francis P. Sempa, New York Journal of Books
"An interesting and useful addition to the scholarship on World War II."—Golda Eldridge, Air Power History
"One would think the story of the conception and planning for the D-Day landings had been well covered, but Padgett, a veteran of decades of service in national security, disarmament, and preparedness analysis, breaks surprising new ground in this book. . . . Advocating Overlord is a very good read for anyone interested in the Second World War."—A. A. Nofi, Strategy Page
"Advocating Overlord presents two worthy overarching lessons for today’s warfighter. First, it displays how strategic leaders make executive decisions and operational staffs negotiate details to meet the political vision. Second, it illustrates how to plan and win against a peer competitor in multiple warfighting domains under formidable resource constraints. . . . A testament to the single-battle concept too often ignored during the counterinsurgency era. I recommend Advocating Overlord primarily because it reinforces the basics of planning and decision making for today’s military professional."—Bradley Fultz, Proceedings
"A fascinating narrative."—Bradley P. Tolppanen, A Blog on Winston Churchill
“From the very first sentence, this is a gripping tale that illuminates the critical transition from World War II into the Atomic Age. Exhaustively documented, this book is a treasure for the amateur and professional historian alike.”—David Wood, Pulitzer Prize–winning journalist
“A textual Bayeux Tapestry, Philip Padgett’s panorama is a mesmerizing tale of how in 1943 Franklin Roosevelt rebuffed Winston Churchill’s passion for an exclusively Mediterranean campaign and authorized instead the Anglo-American amphibious assault on Normandy of June 6, 1944, meanwhile limiting British participation in development of the atomic bomb.”—Kenneth J. Hagan, professor of history and museum director emeritus at the U.S. Naval Academy
“Padgett has provided us with an excellent, extremely insightful study of the pivotal negotiations during 1943 that determined whether and how the fledgling Anglo-American alliance would solidify to make a significant contribution to the defeat of Nazi Germany and go on to provide the basis for post-war western security.”—Richard H. Harding, professor of organizational history at the University of Westminster and coeditor of Naval Leadership in the Atlantic World: The Age of Revolution and Reform, 1700–1850
“Even those well versed in the history of the war will find much to ponder here, including the entanglement of Operation Overlord, the American effort to exclude the British from participation in the building of the atomic bomb, and the final transformation of America’s international role, away from ‘hemispheric defense’ and toward enduring global engagement.”—Daniel Moran, professor of international and military history in the Department of National Security Affairs at the U.S. Naval Postgraduate School and coeditor of Maritime Strategy and Global Security
“Philip Padgett has provided a novel roadmap for tracing this familiar story. His Advocating Overlord is evocatively written and grounded in authoritative research in British and U.S. sources; it offers an intriguing thesis regarding the nexus of issues that led to Operation Overlord.”—Theodore A. Wilson, professor emeritus of history at the University of Kansas

Contents
List of Illustrations
List of Acronyms
List of Code Names and Military Operations
Note on Time
Prologue
1. Symbol, the Casablanca Conference
2. Campaigns of Attrition
3. cossac’s Ninety Days to Deliver a Plan
4. The Trident Conference’s Illusion of Agreement
5. Mission to Moscow
6. cossac’s Plan Emerges
7. The Green Hornet
8. Hammer and Tongs
9. Revolt in London and Washington
10. The Fishing Trip
11. From One Attorney to Another
12. The Happy Time at Birch Island
13. Plain Speaking on the Potomac
14. A Presidential Directive
15. Blenheim on the Hudson
16. Overlord Reaffirmed in Quebec
17. Bolero Unleashed
18. Sealing the Quebec Decisions
Epilogue
Acknowledgments
Notes
Bibliography
Index