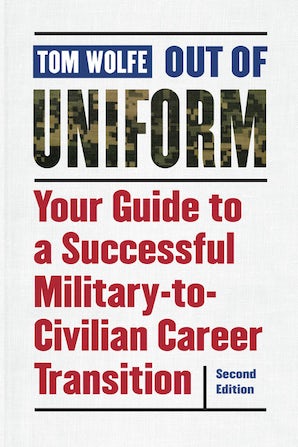 Your Guide to a Successful Military-to-Civilian Career Transition

After completing military service, veterans can have a difficult time finding employment when returning to civilian life. Out of Uniform, Second Edition is designed to help all transitioning military personnel, regardless of service, branch, rank, rating, time in service, time in grade, or specialty. Although all service members share common denominators, each individual brings something unique to the job market. Not only does this book cover the basics—search techniques, networking, interview preparation, résumés, negotiation, and a new chapter on social media—it also offers guidance on topics that are often overlooked, specifically the central issues of self-knowledge, interviewing empathy, and the power of questions.

In addition to the technical guidance, readers will also discover important information in the anecdotes based on the experiences of soldiers, sailors, air force personnel, and marines. Out of Uniform, Second Edition is an invaluable resource for veterans who want to make the most out of their civilian career opportunities.

Tom Wolfe graduated from the U.S. Naval Academy, served as a surface warfare officer in the navy, and completed tours of duty as a flag aide, communications officer, and administrative department head. He is a recognized expert in the field of career transition. Formerly a senior partner at Career Development Corporation, he provided guidance to separating military personnel for almost thirty years. His columns and articles have appeared regularly in digital and print media, including Military.com, Military Transition News, Stars and Stripes, G.I. Jobs, TAOnline, and Veterans of Modern Warfare.

“We owe our military service members so much, including the right to compete for a job when they leave the service. Out of Uniform just might give them that competitive edge. Are you a veteran? Read it! Know a veteran? Make sure he or she has a copy!”—Mike Krzyzewski, U.S. Army veteran and Duke University men’s basketball coach
“With the exception of leaving civilian life for the military, no professional change is more cathartic or challenging than the transition back out of uniform. Key for success is preparation, both mental and emotional. Tom Wolfe provides the indispensable guide to help you both prepare and succeed.”—Lt. Gen. Dan Christman, U.S. Army (Ret.), former superintendent of the U.S. Military Academy

Preface
Acknowledgments
Introduction
Note on the Second Edition
Section 1. Transition Readiness
1. Life Is Like a Roller Coaster
2. The Education of Self
3. Stereotypes
4. Master of Change
5. The Four Profiles
6. Filters, Part One (Employer’s)
7. When Can You Start?
8. Travel: Are Your Bags Packed?
9. Grade Point Average
10. How Much Are You Worth?
11. Will You Relocate?
12. Filters, Part Two (Your Own)
13. Quality of Life versus Quality of Work
14. Educational Background Check
15. Transition Timeline
Section 2. The Self-Discovery Zone
16. From Trees to Toilet Paper
17. Lifetime Tasks and Skills Inventory
18. What Size Company Is Best for You?
19. The Digital You and Your Virtual Résumé
20. What’s behind Curtain Number Three?
21. Experience or Potential?
22. The Best Job for You?
23. Job Hunting from a Remote Location
24. The Geographically Restricted Job Search
Section 3. The Other Side of the Fence
25. What’s Out There?
26. I Want to Work with People
27. I Want to Be a Manager
28. Operations Management
29. Engineering
30. Is Consulting Right for You?
31. Government Contractors
32. Additional Options
33. The Boss of Me
34. The S Word
35. Your SQ Number
36. The Audition
Section 4. Preparations (Mechanical)
37. Your Decision Matrix (Part 1: Design)
38. The Six Ps
39. Documentation
40. Creating Your Résumé
41. Cover Letters
42. Your Reference List
43. Application Forms: Thank Goodness I Made a Copy
44. Uniform of the Day
45. Finding Uncle Harry or Aunt Mary
46. Headhunters
47. An Employment Perfect Storm
48. The Runaway Résumé
Section 5. Preparations (Mental)
49. The Power of Questions
50. Researching Companies
51. Knowledge Is Power
52. Wallflowers and Cheerleaders
53. Weaknesses: Use Them to Your Benefit
54. Camaraderie and the Power of People
55. Tell ’Em What They Want to Hear
Section 6. Interviews: Tips and Techniques
56. Body Language
57. Interviewers: The Good, the Bad, and the “Ugly”
58. What’s with That Tie?
59. From Adversary to Advocate
60. All of My Questions Have Been Answered
61. Please Leave a Message at the Beep
62. Be Memorable
63. Extra Preparations
Section 7. Interviews: Variety and Function
64. Interview and Etiquette Checklist
65. Interviews: Purpose and Varieties
66. Can You Hear (and Maybe See) Me Now?
67. Let’s Do Lunch
68. Following Up after the Interview
69. Until the Paperwork Is Done
70. We Regret to Inform You
71. Your Decision Matrix (Part 2: Usage)
Section 8. Offer, Decision, and Launch
72. Learning How to Swim
73. The Power Shift
74. Job Offer: The Message and the Makeup
75. The REV Factor
76. The High Jumpers
77. Will You Marry Me?
78. One-Offer-Itis
79. Salary Negotiation
80. Responding to Offers—the Right Way
81. Lift Off and Stay on Course
82. A Personal Trainer for Your Career
83. Has the Ride Lost Its Thrill?
Afterword
Index