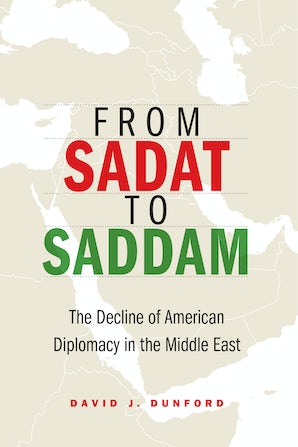 The Decline of American Diplomacy in the Middle East

From Sadat to Saddam offers a fresh perspective on the politicization of the U.S. diplomatic corps and the militarization of U.S. foreign policy in the Middle East. This book begins with the 1981 assassination of Egyptian president Anwar Sadat, continues through two Gulf wars, and ends with the U.S. withdrawal of combat troops from Iraq in 2011.

This firsthand account of thirty years in the diplomatic trenches of U.S. foreign policy in the Middle East addresses the basic questions of how and why we find ourselves today in endless military conflict and argues that it is directly related to the decline in reliance on our diplomatic skills. From Sadat to Saddam offers an in-depth look by a career diplomat at how U.S. soft power has been allowed to atrophy. It chronicles three decades of dealing not just with foreign policy challenges and opportunities but also with the frustrations of working with bureaucrats and politicians who don’t understand the world and are unwilling to listen to those who do. The book makes clear that the decline of our diplomatic capability began well before the election of Donald Trump. It recommends that instead of trying to make soldiers into diplomats and diplomats into soldiers, we invest in a truly professional diplomatic service.

David J. Dunford served three years as the U.S. ambassador to Oman and served four years, including during the 1990–91 Gulf War, as the deputy ambassador to Saudi Arabia. He is a member of the governing board of the University of Arizona’s Center for Middle East Studies. He has taught courses on the Arab-Israeli conflict and the Middle East business environment at the University of Arizona and has consulted for both the government and the private sector on Middle East issues. He is the coauthor of Talking to Strangers: The Struggle to Rebuild Iraq’s Foreign Ministry. He divides his time between Tucson and Durango.

"Ambassador Dunford has written a concise, entertaining, and insightful book on US diplomacy in the Middle East, which will be helpful to students of diplomacy, those interested in the history of US involvement in the region from the 1980s to the early 2000s, and for anyone considering a Foreign Service career."—Charles W. Dunne, Middle East Journal
"David Dunford’s From Sadat to Saddam is a terrific read and is an interesting contribution to the growing number of books by former ambassadors. His insight provides an honest appraisal of the decline of US diplomacy and provides an outline of how America’s diplomatic corps can rebuild."—Justin Quinn Olmstead, Middle Ground Journal
"In his new and beyond timely book, former Ambassador David J. Dunford gives credence to the disturbing message delivered by Ambassador Marie Yovanovitch at the recent impeachment hearings when she spoke of the 'hollowing out' of the State Department. . . . Dunford’s memoir is as much personal as it is professional and his recollections—from rescuing Barbara Bush from an overdose of incense at a presidential dinner in Saudi Arabia, to coping with the primitive conditions his team encountered when they were stationed in Saddam’s opulent but filthy palace—provide an engaging, and often surprising behind-the-scenes look at life in the trenches of the Foreign Service."—Helene Woodhams, tucson.com
“Ambassador Dunford has written a very important book that is much more than just a memoir. It vividly describes the challenges faced by those on the frontlines of diplomacy and how Washington can often make those challenges even more daunting by incoherent or inattentive policy. A must-read for anyone who wants to know how the real world of diplomacy works, or fails to.”—Ambassador Dennis Jett (Ret.), professor of international affairs at Pennsylvania State University

“Ambassador Dunford has written an important and timely book that shows why U.S. diplomacy still matters in an era of reduced budgets and insufficient understanding of just what diplomats do. His long and varied career in the Foreign Service is a testament to how the State Department can successfully contribute to making the United States and the world more secure—but only with proper resources and leadership. Dunford’s book, full of personal insights, deserves a wide readership.”—J. Kael Weston, author of The Mirror Test: America at War in Iraq and Afghanistan

“[David Dunford’s] down-to-earth narrative describes his engagement with issues large (the U.S. response to the Iraqi invasion of Kuwait) and small (day care for embassy families in Riyadh). . . . This is an exquisite portrait of what our diplomats are capable of and how their role has deteriorated, especially after the invasions of Afghanistan and Iraq.”—Daniel Serwer, academic director of conflict management at the Johns Hopkins School of Advanced International Studies

1. Cairo: Drinking from the Nile

8. Tucson: Working with the Troops

Conclusion: Toward an Effective U.S. Diplomacy