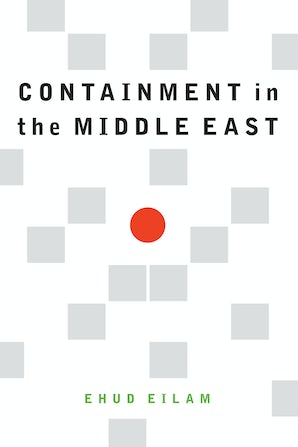 Containment in the Middle East

National security affairs analyst Ehud Eilam examines the strategy of containment in the Middle East as it is currently pursued. For the United States, containment is a way to avoid war with Iran and thwart its nuclear weapons program. For Israel it has been a way to prevent a confrontation with the Palestinians in both the Gaza Strip and the West Bank.

In other cases containment is meant to weaken a foe without starting a war, as Israel did by bombing shipments of weapons to Hezbollah. Containment was also part of the war in Syria—because the West lacked the ability to overthrow Bashar al-Assad, though it cost the civilian population there dearly. Egypt has been trying to contain both its enormous economic hardships and ISIS, primarily in the Sinai Peninsula.

Ultimately Eilam provides important and timely insights into the Middle East’s perennially fluid and volatile political environment. His insights and analyses will be of interest not least in the corridors of power both here and abroad.

Ehud Eilam is a national security affairs analyst who formerly worked for the Israeli Ministry of Defense. He has a PhD in history from Bar-Ilan University in Israel.

"Eilam's book offers a concise, informed, fact-filled guide to developments in conspicuous Middle Eastern hot zones over the past decade. That the author sets these developments within the framework of the containment strategies pursued by both regional and international state and non-state actors during this period simply brings these developments, as well as the connections amongst them, into clearer focus."—David Rodman, Israel Affairs
"Containment in the Middle East may be the most comprehensive study of the Middle East and attempts by the United States, Israel, and Arab Gulf nations to contain Iran. It is a must read for policy makers and those with an interest in the Middle East."—Jesse McIntyre III, Military Review
“Eilam’s new book provides a well-informed, insightful, and thought-provoking study. The material in the book is organized in a sound and analytical fashion. It is a must-read for those who wish to acquire deeper knowledge of the Middle East and particularly about Israel’s national security affairs.”—Arnon Gutfeld, professor emeritus of U.S. history at Tel-Aviv University
“In this important new book Ehud Eilam, a former researcher in the Israeli Ministry of Defense, chronicles and analyzes the various forms of containment strategies in operation in the Middle East. It is a compelling and comprehensive study and essential reading for those who seek to better understand security dynamics in the region.”—Matthew Kroenig, associate professor of government and foreign service at Georgetown University
“Ehud Eilam’s Containment in the Middle East offers readers a fact-filled and comprehensive scheme for examining core Middle East security issues through the unifying lens of ‘containment.’. . . Eilam, who has a conspicuously well-deserved reputation for industrious and capable scholarship, is especially skilled at laying out a broad variety of possible scenarios and options, and doing so by means of a systematic and thoughtful strategic dialectic. . . . I strongly endorse this new book with enthusiasm and without any reservations.”—Louis René Beres, chair of Project Daniel and author of Surviving Amid Chaos: Israel’s Nuclear Strategy?

1. The Effort to Contain Iran

5. Israel, Hamas, and the Palestinian Authority

7. idf’s Buildup and Preparations for War