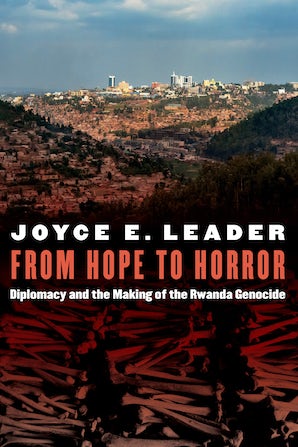 Diplomacy and the Making of the Rwanda Genocide

As deputy to the U.S. ambassador in Rwanda, Joyce E. Leader witnessed the tumultuous prelude to genocide—a period of political wrangling, human rights abuses, and many levels of ominous, ever-escalating violence. From Hope to Horror offers her insider’s account of the nation’s efforts to move toward democracy and peace and analyzes the challenges of conducting diplomacy in settings prone to—or engaged in—armed conflict.

Leader traces the three-way struggle for control among Rwanda’s ethnic and regional factions. Each sought to shape democratization and peacemaking to its own advantage. The United States, hoping to encourage a peaceful transition, midwifed negotiations toward an accord. The result: a revolutionary blueprint for political and military power-sharing among Rwanda’s competing factions that met categorical rejection by the “losers” and a downward spiral into mass atrocities. Drawing on the Rwandan experience, Leader proposes ways diplomacy can more effectively avert the escalation of violence by identifying the unintended consequences of policies and emphasizing conflict prevention over crisis response.

Compelling and expert, From Hope to Horror fills in the forgotten history of the diplomats who tried but failed to prevent a human rights catastrophe.

Joyce E. Leader is a retired U.S. Foreign Service officer who served as the deputy chief of mission in Rwanda and as a U.S. observer to the Rwandan peace talks in Arusha, Tanzania. She culminated her State Department career as an ambassador to the Republic of Guinea in West Africa. She specializes in political affairs, refugee affairs, human rights, conflict resolution, and international organizations.

“Ambassador Joyce E. Leader provides a rare, moving, and personal account of the path to genocide in Rwanda, arguing that U.S. and international diplomacy, which prioritized democracy promotion and peace over conflict prevention, inadvertently contributed to the crisis. From Hope to Horror offers practical lessons for policy makers derived from Rwanda’s tragedy.”—Susan E. Rice, former national security adviser and U.S. permanent representative to the United Nations
“Joyce Leader’s authoritative account of the years and months leading up to Rwanda’s orgy of killing in 1994 is destined to become a definitive history of what went wrong, why, and when. It belongs at the center of literature on this important episode in Africa’s modern history.”—Chester A. Crocker, James R. Schlesinger Professor of Strategic Studies at the Edmund A. Walsh School of Foreign Service, Georgetown University
“Insightful and compassionate, this book details the bitter power struggle behind the Rwandan genocide. . . . Joyce Leader makes a convincing, heartfelt case for early diplomatic interventions to stem conflicts before military involvement.”—Lt. Gen. Roméo Dallaire (Ret.), former commander of the United Nations Peacekeeping Forces in Rwanda
“A treasure trove of information and insights. Joyce Leader’s plan for diplomatic reform that would prioritize conflict prevention and resolution and her detailed organizational proposals deserve wide reading within the foreign policy and national security policy communities.”—Herman J. Cohen, former U.S. assistant secretary of state for African affairs and career ambassador
“Joyce Leader obliges us to . . . ask how so many well-intentioned diplomats could have inadvertently contributed to one of the most murderous episodes in modern history. Her book is a must-read for all who hope to honor the injunction ‘Never again!’”—George Moose, vice chair of the U.S. Institute of Peace and former assistant secretary of state for African Affairs
“There is no better source of information on the lead-up to the Rwandan genocide than Ambassador Joyce Leader. She brings a wealth of knowledge as a seasoned foreign service officer and diplomat in Rwanda at that time. This volume is useful for policy makers and academics alike.”—Susan F. Martin, Donald G. Herzberg Professor Emerita of International Migration at Georgetown University