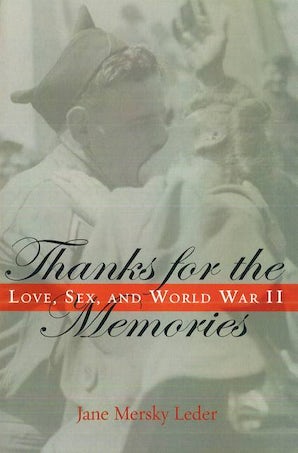 Thanks for the Memories

The collective consciousness of World War II revolved around the virtues of bravery, sacrifice, and commitment. Members of the “Greatest Generation” toed political and social lines in hopes of winning the war. They fell into lockstep, not asking many questions and breaking few social and sexual mores. Or did they?In fact, World War II, like all wars, was an era of sexual experimentation and a general loosening of morals. During this time of conflicting emotions and messages, of great sacrifice, and of discovery, some groups, especially women, experienced a relaxing of bonds that had kept them in check. Thanks for the Memories: Love, Sex, and World War II is the true story of how that generation responded to the fervor of war and how those passions changed their lives—and the relationships between the sexes—forever.But this book is more than that. As Jane Mersky Leder writes, “Thanks for the Memories opens the hearts and memories of a generation that is dying, by one estimate, at the rate of more than 1,000 a day.” It not only exposes the Greatest Generation’s sexual and romantic escapades, it underscores how those four war years revolutionized relationships (including those between gays) and helped set the stage for the second wave of the women’s liberation movement. “Many who never thought their stories mattered,” Leder writes, “now feel the pull of limited time, and the importance of leaving an accurate account for their children and grandchildren of what it was like to be a young man or young woman during World War II. This is their collective story.”

“Lively, moving, evocative and memorable, Thanks for the Memories brings back to us the extraordinary changes that occurred among women and men during World War II, and recreates for us their pain, joy and courage.”—William H. Chafe, Alice Mary Baldwin Professor of History, Duke University
“Jane Mersky recounts the stories of ordinary people in extraordinary times, and brings the World War II era to life. Beautifully written and poignant, sometimes romantic but not always, Thanks for the Memories recounts how men and women during World War II sought love, sex, and security in the midst of the upheavals of wartime.”—Elaine Tyler May, author of Homeward Bound: American Families in the Cold War Era
“Thanks for the Memories vividly portrays the disruptive impact of World War II on relations between men and women, not only in the well documented arena of labor force participation, but also in the realms of sex, love, and marriage. The wartime generation, known for its conservative embrace of traditional domesticity in the 1950s, did so after having broken all the rules. Jane Mersky Leder makes a persuasive case that the women’s movement in the late 1960s was an aftershock of these seismic shifts whose story, until now, has not been told.”—Sara M. Evans, professor of history, University of Minnesota, and author of Born for Liberty: A History of Women in America
"Through engaging stories and recollections, Leder paints a vivid picture of the love lives of the members of the Greatest Generation, from the service wives who followed their husbands around the country during their stateside training to the 'khaki-wackies' and 'Victory girls' who gave servicemen a roll in the hay in exchange for a Coca-Cola or a movie, to women, African Americans, and gays and lesbians who defied society to enlist in the military. Always enlightening and never prurient, Thanks for the Memories illuminates an untold chapter in World War II history- a chapter that resonates today in the continual redefining of gender roles and race relations."—America in WWII
"Thanks for the Memories is one of those rare books that one can either read quickly or savor slowly. A times it is fun and witty; at other times it is poignant and thought-provoking."—Detroit Jewish News