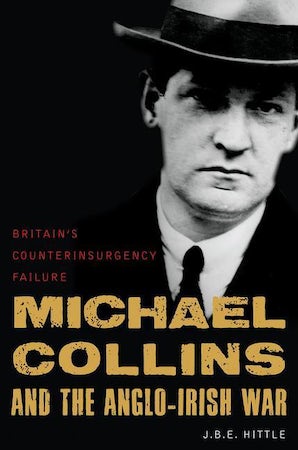 Michael Collins and the Anglo-Irish War

As leader of the Irish Republican Brotherhood and then the Irish Republican Army (IRA), Michael Collins developed a bold, new strategy to use against the British administration of Ireland in the early twentieth century. His goal was to attack its well-established system of spies and informers, wear down British forces with a sustained guerrilla campaign, and force a political settlement that would lead to a free Irish Republic.Michael Collins and the Anglo-Irish War reveals that the success of the Irish insurgency was not just a measure of Collins’s revolutionary genius, as has often been claimed. British miscalculations, overconfidence, and a failure to mount a sustained professional intelligence effort to neutralize the IRA contributed to Britain’s defeat.Although Britain possessed the world’s most professional secret service, the British intelligence community underwent a politically driven and ill-advised reorganization in early 1919, at the very moment that Collins and the IRA were going on the offensive. Once Collins neutralized the local colonial spy service, the British had no choice but to import professional secret service agents. But Britain’s wholesale reorganization of its domestic counterintelligence capability sidelined its most effective countersubversive agency, MI5, leaving the job of intelligence management in Ireland to Special Branch civilians and a contingent of quickly trained army case officers, neither group being equipped—or inclined—to mount a coordinated intelligence effort against the insurgents. Britain’s appointment of a national intelligence director for home affairs in 1919—just as the Irish revolutionary parliament published its Declaration of Independence—was the decisive factor leading to Britain’s disarray against the IRA. By the time the War Office reorganized its intelligence effort against Collins in mid-1920, it was too late to reverse the ascendancy of the IRA.Michael Collins and the Anglo-Irish War takes a fresh approach to the subject, presenting it as a case study in intelligence management under conditions of a broader counterinsurgency campaign. The lessons learned from this disastrous episode have stark relevance for contemporary national security managers and warfighters currently engaged in the war on terrorism.

J. B. E. Hittle is a thirty-one-year veteran of U.S. intelligence, including initial service as a military intelligence analyst and later service as a senior clandestine operations officer. He is an expert on insurgency, counterinsurgency, low-intensity conflict, counterterrorism, and counterproliferation. He received his MA in modern European history from Louisiana State University, where his research focused on the polemics of Irish Marxist James Connolly.

"This fresh look at familiar history is a very worthwhile addition to the literature."—Studies in Intelligence
"Hittle has done us a favor by presenting a provocative analysis that will undoubtedly stir more new approaches in considering what might have been."—Edward J. Hagerty, Journal of Strategic Security
"An intelligence service suffering from confusion, inefficiency, and demoralization is a ripe target for the adversary to penetrate, defeat, and exploit. That is why a strategically coherent counterintelligence capability is never more important than in times of turmoil and change. We see this in the story of Ireland that follows, and yes, we see this dynamic at work in the United States today."—From the foreword by Michelle Van Cleave, former U.S. counterintelligence executive and senior fellow, National War College
"It is always refreshing to come across a book that sets out to deal with the bitter conflict that soured Anglo-Irish relations for most of the twentieth century as a piece of history rather than an emotional experience. J. B. E Hittle does an excellent job at scraping away many of the myths about both sides in this messy struggle, making it an essential read for anyone interested in the Anglo-Irish War and its contribution to the development of modern insurgency, counterinsurgency, and intelligence operations."—Maj. Peter Cottrell, British Army (Ret.), author of The Anglo-Irish War and The War For Ireland
"Much has been written about Michael Collins's intelligence genius, but this is the first attempt by an intelligence professional to detail and to critically appraise Britain's attempts at response to it. A picture of official disorganization, interagency rivalry, and amateurism emerges, redeemed at times by acts of personal bravery and initiative. A valuable and succinct account, Michael Collins and the Anglo-Irish War narrates the emergence of many of the operational and structural ground rules that even yet underpin effective intelligence and counterintelligence work."—Conor Brady, former editor of the Irish Times and historian of policing in Ireland