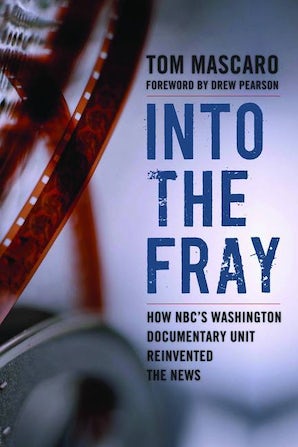 From 1961 to 1989, a committed group of documentary journalists from the National Broadcasting Company (NBC) reported the stories of America’s overseas conflicts. Stuart Schulberg supplied film evidence to prosecute Nazi war criminals and established documentary units in postwar Berlin and Paris. NBC newsman David Brinkley created the template for prime-time news in 1961 and bore the scars to prove it. In 1964 Ted Yates and Bob Rogers produced a documentary warning of the pitfalls in Vietnam. Yates was later shot and killed in Jerusalem on the first day of the Six-Day War while producing a documentary for NBC News.
In Into the Fray, Tom Mascaro vividly recounts the characters and experiences that helped create a unique, colorful documentary film crew based at the Washington bureau of NBC News. From the Kennedy era through the Reagan years, the journalists covered wars, rebellions, the Central Intelligence Agency, covert actions, the Pentagon, military preparedness, and world and American cultures. They braved conflicts and crises to tell the stories that Americans needed to see and hear, and in the process they changed the face of journalism. Mascaro also looks at the social changes in and around the unit itself, including the struggles and triumphs of women and African Americans in the field of television documentary. Into the Fray is the story of adventure, loyalty to reason, and life and death in the service of broadcast journalism.

Drew Pearson (1897–1969) was an active journalist for nearly fifty years. At the time of his death, his column Washington Merry-Go-Round was carried by 650 newspapers. He was well known for his extensive use of investigative journalism.

"A well-researched and well-written book."—Mike Conway, American Journalism
“Tom Mascaro has given us an important and instructive history of the storied place of Ted Yates and NBC News in the pantheon of documentaries. As a young man I was inspired by this work—and to this day I remain so.”—Tom Brokaw, former anchor and managing editor, NBC Nightly News
“Into the Fray is a captivating read about the origins of the television documentary. It tells its story with clarity and insight, and is interesting for anyone who makes or cares about long-form journalism.”—Michael Kirk, producer, director, and writer, Frontline
“A must-read for journalism students and fans of the documentary, Mascaro’s history of the legendary NBC Washington documentary unit is taken straight from the reporter’s notebooks and contains invaluable insights into both the history and courageous journalism of the turbulent 1960’s.”—Rhonda Schwartz, chief for investigative projects, ABC News
“An important contribution to broadcast journalism and documentary history, providing an on-the-ground chronicle that counters many common assumptions about network documentary journalism in its ‘golden age.’”—Patricia Aufderheide, professor of communication studies and director, Center for Social Media, School of Communication, American University
“Tom Mascaro has written a lucid, thorough, and thoughtful account of television news and the men and women who brought important documentaries to a receptive audience. Based on substantial research in a wide range of primary and secondary sources, this insightful and impressive book is of significance to media scholars and historians and deserves to be read by a wide audience.”—Gary Hess, Emeritus Distinguished Research Professor of History, Bowling Green State University