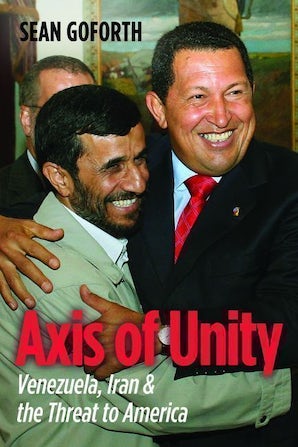 Venezuela, Iran & the Threat to America

Two of the most prominent trends in world affairs over the past decade—the projection of American power abroad and high energy prices—have made for some strange bedfellows. Flush with oil revenues, autocratic governments in Venezuela, Iran, and Russia have tried to counter U.S. influence not only in Latin America but around the world. In Axis of Unity, Sean Goforth explores the motives and contributions of each nation to the partnership. Venezuela and Iran’s self-declared “axis of unity” in 2007 forms the alliance’s base. Caracas and Tehran support each other’s attempt at regional domination through a series of illicit ties. Russia provides the alliance’s superstructure, shielding Iran from Western ire and selling billions of dollars worth of sophisticated arms to Caracas and Tehran. The regional repercussions of this alliance, Goforth asserts, are far-reaching. Venezuela and Iran utilize various forces—the Revolutionary Armed Forces of Colombia (FARC), Hamas, Hezbollah, and the Quds Force—to attack regional competitors, chiefly Colombia and Israel. The key to dismantling the threat, Goforth demonstrates, is a flexible foreign policy. America should take a bold stand against Russia in Eastern Europe, where leaders seek strong U.S. backing, and adopt a long-term plan for reducing the influence of Venezuela and Iran in Latin America and the Middle East. Axis of Unity will be of great value to readers interested in international affairs, U.S. foreign policy, security studies, and the geopolitics of rising powers.

Sean Goforth teaches world politics and international political economy at Coastal Carolina University in Conway, South Carolina. He blogs for the Foreign Policy Association and is a regular contributor to World Politics Review. His articles have been published in the online editions of the New York Times and the London Telegraph and have been cited by the Congressional Research Service. Goforth is a graduate of the University of North Carolina-Chapel Hill and the School of Foreign Service at Georgetown University. He lives in Calabash, North Carolina.

"Sean Goforth merits praise for tackling a difficult and, from the U.S. security perspective, vexing research challenge. He has, without the assistance of the Central Intelligence Agency, projected a powerful light onto the expanding relationship between Venezuela, under its anti-American president Hugo Chavez, and the revolutionary Islamist tyrants of Iran. Determined to wage an asymmetric struggle against the United States, Venezuela and Iran stand united in their efforts to undermine U.S. influence throughout the Western Hemisphere. Axis of Unity is a wake-up call. It should be required reading for the White House, the State Department, and all aspirants to the U.S. presidency in 2012."—Ray Walser, senior policy analyst, Heritage Foundation
"What Sean Goforth does in this book is remind us that America's opponents don't just stand still, waiting to be picked off. Washington has clearly mishandled our relationships with both 'revolutionary' Iran and Venezuela, and Goforth does a great job pointing us all toward better policies."—Thomas P. M. Barnett, author of Great Powers: America and the World after Bush and chief analyst, Wikistrat
"The Iran-Venezuela-Russia alliance poses the most serious security threat in the Americas since the Soviet-Cuban alliance of the Cold War. For Goforth, the threats are real, ranging from 'infecting' pro-U.S. governments with instability, permitting each other and their allied nations to rely less on the West, and providing safe passage among themselves of 'unsavory people and things,' like terrorists, fugitives, arms, illicit funds, and even uranium. Goforth is no alarmist, but he shows nonetheless that no state, especially those situated near these axis members, should take these threats lightly."—Javier Corrales, professor of political science, Amherst College, and author of Dragon in the Tropics