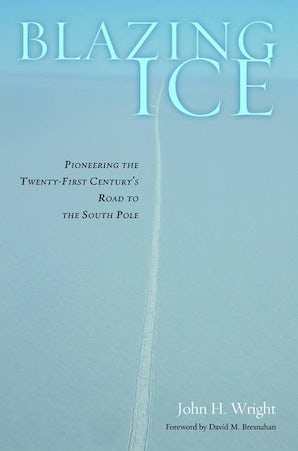 Pioneering the Twenty-first Century's Road to the South Pole

The Antarctic is the last vast terrestrial frontier. Just over a century ago, no one had ever seen the South Pole. Today odd machines and adventure skiers from many nations converge there every summer, arriving from numerous starting points on the Antarctic coast and returning some other way. But not until very recently has anyone completed a roundtrip from McMurdo Station, the U.S. support hub on the continental coast. The last man to try that perished in 1912. The valuable surface route from McMurdo remained elusive until John H. Wright and his crew finished the job in 2006. Blazing Ice is the story of the team of Americans who forged a thousand-mile transcontinental “haul route” across Antarctica. For decades airplanes from McMurdo Station supplied the South Pole. A safe and repeatable surface haul route would have been cheaper and more environmentally benign than airlift, but the technology was not available until 2000. As Wright reveals in this gripping narrative, the hazards of Antarctic terrain and weather were as daunting for twenty-first century pioneers as they were for Norway’s Roald Amundsen and England’s Robert Falcon Scott when they raced to be first to the South Pole in 1911–1912. Wright and his team faced deadly hidden crevasses, vast snow swamps, the Transantarctic Mountains, badlands of weird wind sculpted ice, and the high Polar Plateau. Blazing Ice will appeal to Antarctic aficionados, conservationists, field scientists, and adventure readers of all stripes.

John H. Wright began his career in the underground mines of the American West as a mining geologist and hard rock miner. With the closing of the western frontier he headed south to Antarctica, serving first as an explosives engineer, then later driving a tunnel in the ice beneath the South Pole. Because of his record in service to the United States Antarctic Program executing dangerous, difficult jobs with an impeccable record for safety and achievement, he was selected to lead the historic South Pole Traverse Proof-of-Concept Project. He is honored to tell its story.

"There are a number of success stories in the history of the United States involvement in Antarctic research and logistics, and this is certainly one of them worth telling. . . . The word ‘Pioneering’ in the subtitle of the book is meaningful, for there are few pioneering feats remaining in Antarctica. This book will appeal to anyone with Antarctic experience as well as a general audience, the key attraction being that of adventure and an example of the concept of an idea that evolved into a major success."—John Slpettstoesser, Polar Times
“Nowhere in Antarctic literature is there another piece of exploration writing like Blazing Ice. It’s a firsthand account of a remarkable modern achievement but also a beautiful and profound meditation on the often disastrous conjunction of institutional culture with fieldwork. Everyone who plans to work in places wild and woolly should sit up and take notice.”—William Fox, Antarctic veteran and author of Terra Antarctica
“John Wright and his team’s mission raised the challenge of reaching the South Pole to a huge scale, well beyond that of past explorers. Wright’s rare combination of strong will and steady focus, coupled with his background in the science of geology, provides a near-perfect perspective from which to tell this story. To that mix, add humor, irony, and insight.”—Ted Scambos, lead scientist, National Snow and Ice Data Center, University of Colorado, and Antarctic field glaciologist
“Blazing Ice is a tale of great accomplishment, and John Wright tells it well. He and his team faced danger, yet succeeded in their effort, not with stupid heroics or grandstanding, but with meticulous planning and step-by-step refinement of equipment, technique, and psychology. They drew on true courage, whose hallmark is a clear understanding of the danger, and a determination to accomplish the mission anyway.”—Tom Sawyer, senior editor, Engineering News-Record
“The day the traverse team arrived, the entire South Pole Station population anxiously scanned the horizon. A big U.S. flag flew above their lead tractor. They had just proved a route never before traveled, a monumental benchmark in Polar history. In Blazing Ice, Wright tells the story of this historic achievement with the same attention to detail that he applied to the project. His tale is laced with earthy humor that puts the reader right there in his crew.”—Jerry W. Marty, NSF Representative South Pole Station (retired), Office of Polar Programs, National Science Foundation