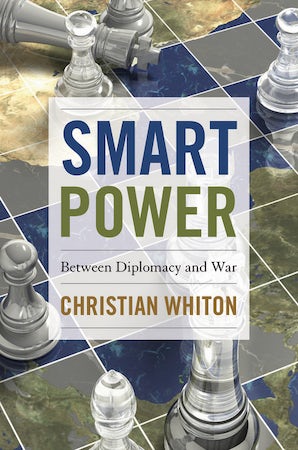 Between Diplomacy and War

From China’s cyber war on America to Islamist victories across the Middle East to the lengthening shadow cast by Iran, the Washington establishment has failed to neutralize foreign threats that are becoming more dangerous. No one on the political left or right has articulated a realistic defense strategy to meet these new challenges of the twenty-first century.

Smart Power—written by a prolific writer and TV commentator who saw firsthand the successes and failures of statecraft in the George W. Bush administration—offers new solutions to the threats America faces today, including radical reform in Washington. Smart Power is one of the first books to draw heavily on leaked classified government cables, revealing what went wrong in episodes like the Arab Spring and the thwarted 2009 uprising in Iran. Christian Whiton uses personal accounts from his experience in the George W. Bush administration to show how China compromises U.S. security with the help of American politicians, bureaucrats, and scholars. He explains why Washington mistreats traditional allies like Israel, Japan, and Taiwan. He presents nonviolent options to undermine the governments of Iran and China and to help moderate Muslims challenge Islamists. He also outlines radical reform of America’s national security apparatus.

Whiton is consistently stingy with the lives of America’s servicemen and wary of new foreign commitments, but he is unapologetic in advancing core U.S. national interests. Using a rich mix of history, captivating personal accounts, and recent events, Whiton defines what would really constitute smart power by reimagining the neglected tools of statecraft that lie between diplomacy and outright war.

Christian Whiton is a former diplomat and presidential campaign advisor. He is a prolific commentator on national security issues. From 2003 to 2009, he was a senior advisor and deputy special envoy in the State Department. He is currently a principal at DC International Advisory, a political risk consulting firm. Whiton holds an MBA from the UCLA Anderson School of Management. He frequently appears on the Fox News Channel, CNBC, and other networks. He has published articles in the Wall Street Journal, Washington Post, Time, Daily Caller, Huffington Post, and numerous other publications around the world. Whiton lives with his partner, Marco McClees, in Los Angeles.

“This book should be read by every unselfconscious, unapologetic patriot, whether conservative or liberal. . . . And it should be on the reading list of every potential candidate who aspires to replace the incumbent president.”—Lewis E. Lehrman, American Spectator
“A fascinating, well-argued book.”—James P. Farwell, Huffington Post
“A failure of the past decade is that our leaders have been lately unwilling to describe our terrorist adversaries and their ideology. As a result, we have too often ceded the battle of ideas to the enemy. Christian Whiton saw the shortcomings of this firsthand at the State Department. Drawing on his experience, the lessons from Arab Spring, and vivid history from the Cold War, Whiton offers new solutions to this missing part of national defense in his compelling new book.”—Donald Rumsfeld, former secretary of defense, George W. Bush and Gerald Ford administrations

“Since the end of the Cold War our foreign policy seems to have developed a bipolar disorder. Occasionally we fight, but otherwise we talk . . . just talk. And we seem to talk toughest to our friends. Christian Whiton shows us how to take a much better path, one on which we help our friends and undermine our adversaries and enemies. His counsel is creative and in equal measure Jeffersonian and Machiavellian. Bravo.”—R. James Woolsey, former director of central intelligence, Bill Clinton administration

“Christian Whiton takes us on a long march through Washington’s national security institutions. At every turn, he offers clear, commonsense fixes for the organizational dysfunction that stands in the way of the whole-of-government action needed to cope with post-9/11 challenges. Readers will start Smart Power by nodding in agreement. They will finish by wanting to shout, ‘YES!’”—Robert Andrews, former deputy undersecretary of defense for counterintelligence and security

“The foreign policy prescriptions Christian Whiton offers in Smart Power are advanced with passion and erudition—and without fear or favor for either political party or any entrenched school of thought. Readers will also receive an extraordinary education in what really goes on inside the State Department, and the ways in which American diplomats must often contend with obstructionist, dilatory, and irrational actors in their own government before venturing forth to engage them in the ministries of our allies and enemies abroad.”—James Rosen, Fox News chief Washington correspondent