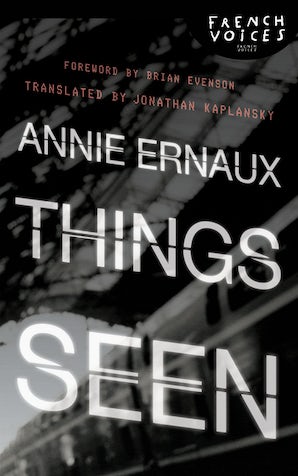 “Annie Ernaux’s work,” wrote Richard Bernstein in the New York Times, “represents a severely pared-down Proustianism, a testament to the persistent, haunting and melancholy quality of memory.” In the New York Times Book Review, Kathryn Harrison concurred: “Keen language and unwavering focus allow her to penetrate deep, to reveal pulses of love, desire, remorse.”
In this “journal” Ernaux turns her penetrating focus on those points in life where the everyday and the extraordinary intersect, where “things seen” reflect a private life meeting the larger world. From the war crimes tribunal in Bosnia to social issues such as poverty and AIDS; from the state of Iraq to the world’s contrasting reactions to Princess Diana’s death and the starkly brutal political murders that occurred at the same time; from a tear-gas attack on the subway to minute interactions with a clerk in a store: Ernaux’s thought-provoking observations map the world’s fleeting and lasting impressions on the shape of inner life.

Annie Ernaux was born in 1940 in Lillebonne, France. Her autobiographical narrative, La Place,won the Prix Renaudot, and her books, A Woman’s Story and A Man’s Place, were named New York Times Notable Books of the Year. Ernaux’s most recent novel, Les Années, is widely considered one of her greatest works. Jonathan Kaplansky has translated numerous works, including Hélène Dorion's novel Days of Sand and Hélène Rioux's novel Wednesday Night at the End of the World. Brian Evenson is a professor and director of the Literary Arts Program at Brown University. He is the author of Altmann’s Tongue (available in a Bison Books edition) and, most recently, Last Days and Fugue State.

“La Vie extérieure bears witness to the desire, the need to capture life, even the insignificant. It attests to the memory that we have of others, including strangers, and in whom Annie Ernaux searches for and recognizes herself. La Vie extérieure is also a book of assessment and indignation. The writer reacts to human distress, war, poverty, and to the arrogance of power.”—Johanne Jarry, Le Devoir (Montreal)
"Annie Ernaux was blogging about her daily life long before the blog was invented. If anyone can raise it to an art form, she can. . . . This is a beautiful translation."—Susan Salter Reynolds, Los Angeles Times Discoveries
"Like a poet, Ernaux writes with dense, image-packed language; like a novelist, she seeks compelling characters to appear and disappear throughout her text."—Rachel Mennies, ForeWord Reviews
"Readers unafraid of mixing the personal and political, as in the works of Simone de Beauvoir and Jean-Paul Sartre, will glean much here. And memoir readers of a more traditional bent may look at the world quite differently after savoring this book."—Travis Fristoe, Library Journal
"Beautiful and powerful."—Alison McCulloch, New York Times Book Review