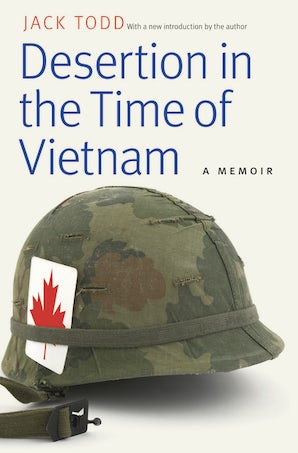 Desertion in the Time of Vietnam

Jack Todd
With a new introduction by the author

In 1969 Jack Todd was twenty-three and happy beyond his dreams. He had left behind a hardscrabble youth in a small Nebraska town, had an exciting job as a reporter for the Miami Herald, and was in love with his beautiful Cuban American girlfriend. As the war in Vietnam drew closer, he assumed that he would fight, as the men in his family had always fought, though he was increasingly troubled by America’s role there. His oldest friend, who had just returned from Vietnam, pleaded with Jack to dodge the draft and go to Canada, but Jack entered the army. He had almost completed basic training when, on Christmas leave, he made an agonizing decision. By now deeply opposed to the war, he crossed the border into Canada, leaving behind his family, the girl he loved, and his homeland.
Now one of Canada’s most successful journalists, Jack Todd is a remarkable writer of great power and vibrancy. It has taken him thirty years to come to terms with the guilt and shame of desertion, to break the silence, and to tell this controversial, moving, and profoundly American story. The result is an eloquent account of a tortured time in our nation’s history told with searing honesty, passion, and literary verve.

Jack Todd is a sports columnist for the Montreal Gazette, where he won the National Newspaper Award for sportswriting. He is also the author of three novels, Rain Falls Like Mercy, Come Again No More, and Sun Going Down.

“America lost some of its best men in the Vietnam war—including those who chose exile. . . . Jack Todd’s [voice] is a clear, brave, truthful rendition of the other experience this nation had, and we need it now more than ever.”—James Carroll, author of An American Requiem and Constantine’s Sword
“This book deserves a high place in the literature of America’s war in Vietnam. Gracefully and eloquently and honestly, without falling into the traps of self-pity or misspent anger, Jack Todd has written a stunning account of his desertion from the U.S. Army in 1969. I doubt that Mr. Todd would call himself a hero—certainly most so-called ‘patriotic’ Americans would not—but having read this frank, beautiful memoir, I can think of no better term to describe a man of such incredible integrity and moral courage. In tight, powerful prose, Mr. Todd captures the terrors and doubts and humiliations that must necessarily accompany such acts of spiritual and political valor.”—Tim O’Brien, author of The Things They Carried and Going After Cacciato
“Through his personal story, Todd conveys, in a voice that haunts and sings, the impact of an unpopular war on a generation of young Americans.”—Publishers Weekly
“A thoughtful meditation.”—Booklist
“A powerful, well-written account.”—Library Journal
“From Jack Todd we come closer to understanding the terrible costs to those who stayed back and survived.”—Quill & Quire