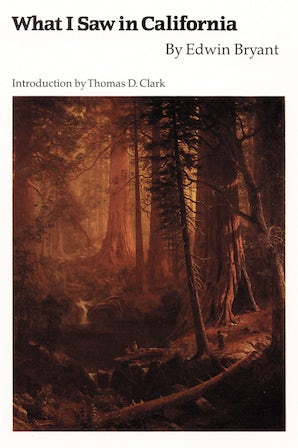 What I Saw in California

First published in 1848, What I Saw in California has long been recognized as the foremost trail guide for the Forty-niners. Almost overnight, Edwin Bryant became their authority on how to survive the grueling passage from Independence, Missouri, to San Francisco, and how to prosper in the Promised Land. He also served as a literary model for the diarists among them.
His popular book was based on journals describing fully his "tour" west in 1846. For the Kentucky newspaperman, it had been an undertaking with an uncertain outcome, since the overland trail was still faint and the fabled, remote California was then in political turmoil. In fact, Bryant's party had headed straight into the Mexican War.
For today's reader, What I Saw in Califorinia is more than a trail guide. It is a valuable primary source of information about the westering experience. In sharp detail, the book portrays births, weddings, and deaths on the trail and the strategies of men and women desperately trying to survive in the adventure of their lives. It introduces such figures as William H. Russell, Joseph Walker, John Charles Frémont, and Stephen Watts Kearny, and includes an early account of the Donner tragedy and of the kaleidoscopic life in California immediately following the American conquest. Its language fixes the restless, feverish wandering that characterized Edwin Bryant and so many of his generation.