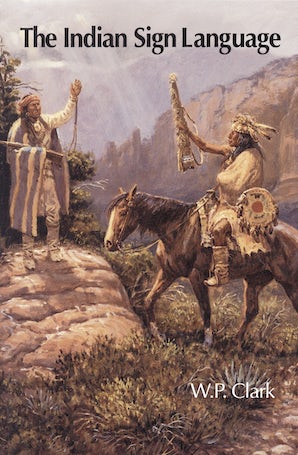 In 1876 and 1877, Captain W. P. Clark commanded a detachment of Indian scouts—including Pawnees, Shoshones, Arapahoes, Cheyennes, Crows, and Sioux—who conversed in sign language. They made requests, relayed information, and told stories with their hands, communicating in a language indispensable for quick understanding between Indians of different tribes. The scouts patiently taught Clark the sign system, which he patiently recorded in this book.

Originally written in 1884 for use by the United States Army, The Indian Sign Language is far more than a grammar book or curiosity. Clark worked closely with the Indians who taught him the language, and his respect for them and their way of thinking informs every page. Written for future officers in Indian regions, The Indian Sign Language corrects the sentimental and brutal stereotypes of Indians that led to much misunderstanding.

Clark believed that sign language could assist him "to think like the Indians," which he considered essential for a conscientious officer. His book discusses reliably and soberly the facts of plains Indian life as he encountered them in the 1870s and 1880s. Now a classic, The Indian Sign Language is a monument to the desire for understanding between radically different peoples.