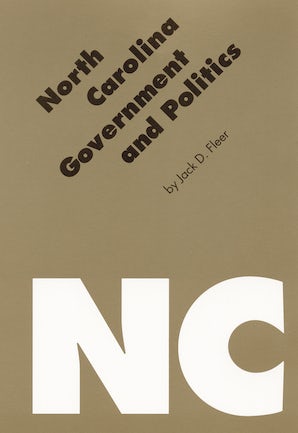 North Carolina has been a leader in the South and the nation since 1775, when it became "First in Freedom" by calling for its independence from British rule. Throughout its history, the state has had a reputation as a progressive force. This book offers both an assessment and an examination of the realities of the state's leadership.

Analyzing a wide range of political actors and organizations, which includes the state legislature, the governor and executive branch, the judiciary, political parties, interest groups, and the media, Fleer illuminates North Carolina's rich political history, its evolving constitutional order, and its changing political culture. Although revealing a pattern of elitist paternalism in the state's political history, the book illustrates a parallel pattern of popular participation and control.

New challenges to the state's future development are its aging population, the preparedness of its work force, the globalization of its economy, the protec-tion of its natural resources, and the education of its children for the next century. Each new political debate, policy choice, and election reminds North Carolinians of their fundamental challenge: establishing a government by enlightened and effective popular consent.

Jack D. Fleer is a professor of political science at Wake Forest University and the author of North Carolina Politics: An Introduction.