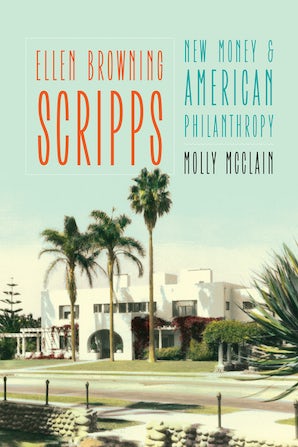 Molly McClain tells the remarkable story of Ellen Browning Scripps (1836–1932), an American newspaperwoman, feminist, suffragist, abolitionist, and social reformer. She used her fortune to support women’s education, the labor movement, and public access to science, the arts, and education.

Born in London, Scripps grew up in rural poverty on the Illinois prairie. She went from rags to riches, living out that cherished American story in which people pull themselves up by their bootstraps with audacity, hard work, and luck. She and her brother, E. W. Scripps, built America’s largest chain of newspapers, linking midwestern industrial cities with booming towns in the West. Less well known today than the papers started by Joseph Pulitzer and William Randolph Hearst, Scripps newspapers transformed their owners into millionaires almost overnight.

By the 1920s Scripps was worth an estimated $30 million, most of which she gave away. She established the Scripps Institution of Oceanography in La Jolla, California, and appeared on the cover of Time magazine after founding Scripps College in Claremont, California. She also provided major financial support to organizations worldwide that promised to advance democratic principles and public education.

In Ellen Browning Scripps, McClain brings to life an extraordinary woman who played a vital role in the history of women, California, and the American West.

Molly McClain is a professor of history at the University of San Diego. She is the author of Beaufort: The Duke and His Duchess, 1657–1715 and Schaum’s Quick Guide to Writing Great Essays.

“What a life! Ellen Browning Scripps made an astonishing amount of money, lived a very long time, and gave millions away. In doing so, she changed the landscape of the far West and earned for herself a pivotal place in American philanthropy. This fine book gives Scripps her due.”—William Deverell, director of the Huntington–USC Institute on California and the West
“[Ellen Browning Scripps’s] progressive legacy undergirds the best of San Diego. This compelling book breaks the glass ceiling in the genre of Southern California biographies.”—Mike Davis, author of City of Quartz: Excavating the Future in Los Angeles

“McClain tells Scripps’s story with verve, suggesting that her example of modest living and exorbitant giving has many lessons for our own gilded age.”—Rebecca Jo Plant, associate professor of history at the University of California, San Diego

“A skillful and loving tribute to Ellen Browning Scripps, one of America’s least-known yet influential philanthropists. This is the inspiring true story of how one person has made a difference in the world.”—William Lawrence, executive director of the San Diego History Center

“McClain’s biography of Ellen Browning Scripps isn’t just about a beloved San Diego philanthropist. . . . [It] is also a history of women’s fight for equality, the rise of mass-market media, Detroit as a booming industrial center, and San Diego as an upstart West Coast center of innovation. Scripps appeared on the cover of Time magazine in the 1920s and she still warrants attention nearly a century later.”—Roger Showley, staff writer for the San Diego Union-Tribune

“McClain’s biography of this remarkable philanthropist and journalist is a gift to all readers.”—Hannah S. Cohen, coauthor of Women Trailblazers of California: Pioneer to the Present