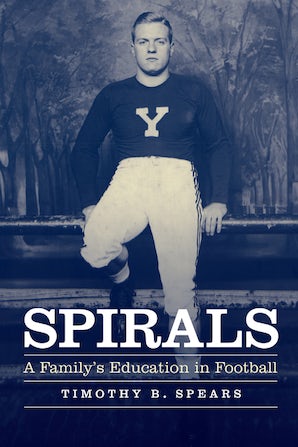 A Family's Education in Football

Ivy League football is a preoccupation in Timothy Spears’s family history. His grandfather Clarence “Doc” Spears was an All-American guard at Dartmouth in the early twentieth century, played on the Canton Bulldogs with Jim Thorpe, became a College Hall of Fame coach, and, as the legend goes, discovered Bronko Nagurski while driving through the backcountry of Minnesota. His father, Robert Spears, captained Yale’s 1951 team and was drafted by the Chicago Bears in 1952. By the time Timothy went to Yale in the mid‑1970s, it was more than talent or enthusiasm that prompted him to play football there.

Spirals tracks the relationship between college football and higher education through the lens of one family’s involvement in the sport. Ranging over almost a century of football history, Spears describes the different ways in which his grandfather, father, and he played the game and engaged with its educational dimensions as the sport was passed from father to son. This intergenerational history attempts to uncover what the males in Spears’s family learned from playing football and how the game’s educational importance shifted over time within higher education.

While Spears chose an academic life after college, he understood later, with the decline of his parents, how much football stayed with him and shaped his family’s history. With a voice that is part memoirist, part scholar, part athlete, as well as father and son, Spears discerns how football is embedded in our culture and came to be the fabric and common language of his family.

Timothy B. Spears is the vice president for academic development and a professor of American studies at Middlebury College. He is the author of 100 Years on the Road: The Traveling Salesman in American Culture and Chicago Dreaming: Midwesterners and the City, 1871–1929.

"This is a terrific book for any college football fan, especially as it covers multiple eras of the game."—Lance Smith, Guy Who Review Sports Books
"With a voice that is part memoirist, part scholar, part athlete, as well as father and son, Spears discerns how football is embedded in our culture and came to be the fabric and common language of his family."—Jason Schott, Brooklyn Digest
“Professor Spears grew up with a noble football lineage. . . . The author uses that history to think deeply about men and violence, football and masculinity, family and higher education. This is no mere jock memoir. Spirals is one of the most thoughtful books I know about sports.”—Elliott Gorn, author of The Manly Art: Bare-Knuckle Prize Fighting in America and Joseph Gagliano Chair in Urban History at Loyola University Chicago
“Tim Spears’s Spirals is an elegant meditation on family, generational change, Yale, and—the cord that binds—football. There are rare books that touch your mind and heart—this is one of them. Like his father’s perfect spirals, like the spirals of time and physical decay that happen to all people and institutions, Spears shows the beauty, pain, and lasting hold of the game. In the story of his family is the tale of the football.”—Randy Roberts, 150th Anniversary Professor and Distinguished Professor at Purdue University
“With a grandfather who coached Bronko Nagurski and a father who captained his Yale team, Timothy Spears was destined to play football at Yale, too. In puzzling out the meaning of that family legacy, and of the game at its center, Spirals is full of hard-won wisdom—and an enthralling read.”—Michael Oriard, author of The Art of Football and Distinguished Professor Emeritus in American literature and culture at Oregon State University