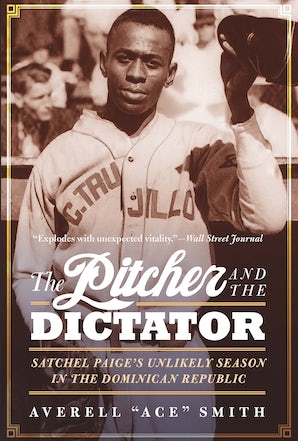 The Pitcher and the Dictator

Soon after Satchel Paige arrived at spring training in 1937 to pitch for the Pittsburgh Crawfords, he and five of his teammates, including Josh Gibson and Cool Papa Bell, were lured to the Dominican Republic with the promise of easy money to play a short baseball tournament in support of the country’s dictator, Rafael Trujillo. As it turned out, the money wasn’t so easy. After Paige and his friends arrived on the island, they found themselves under the thumb of Trujillo, known by Dominicans for murdering those who disappointed him.

In the initial games, the Ciudad Trujillo All-Star team floundered. Living outside the shadow of segregation, Satchel and his recruits spent their nights carousing and their days dropping close games to their rivals, who were also stocked with great players. Desperate to restore discipline, Trujillo tapped the leader of his death squads to become part of the team management.

When Paige’s team ultimately rallied to win, it barely registered with Trujillo, who a few months later ordered the killings of fifteen thousand Haitians at the border between Haiti and the Dominican Republic. Paige and his teammates returned to the states to face banishment from the Negro Leagues, but they barnstormed across America wearing their Trujillo All-Stars uniforms.

The Pitcher and the Dictator is an extraordinary story of race, politics, and some of the greatest baseball players ever assembled, playing high-stakes games in support of one of the Caribbean’s cruelest dictators.

For more information about The Pitcher and the Dictator, visit thepitcherandthedictator.com.

Averell “Ace” Smith is a political consultant and lifelong baseball fanatic. He is a thirty‑year veteran of state and national politics and has directed winning campaigns from district attorney to president of the United States. He has been profiled in the Los Angeles Times, the New Republic, and the San Francisco Chronicle.

“While baseball is at the heart of the book, The Pitcher and the Dictator—the pitcher being the legendary Satchel Paige—the story is about much more, including gunboat diplomacy, the blood-drenched history of the Dominican Republic and, not least, the prevalence of racism and repression in mid-twentieth century America.”—Mark Z. Barabak, Los Angeles Times
“This short, action-packed narrative illuminates one of those footnotes that dot the history of the game but are seldom explored in depth. Here the footnote explodes with unexpected vitality.”—Paul Dickson, Wall Street Journal

"This is a baseball book but it is so much more. It deals with history, politics, and power. . . . I encourage baseball fans and history aficionados to get this book for a good read."—Tom Knuppel, KNUP Sports
"Smith offers a breezy account of an unusual episode in baseball history that was just one of many colorful moments in Paige’s lengthy career."—Missouri Historical Review
"The Pitcher and the Dictator is an entertaining read, and Smith goes to great pains to describe the mood, the weather, the fans' enthusiasm and the sinister specter of Trujillo looking over the all-stars' shoulders. The detail is exquisite."—Bob D'Angelo, Sports Bookie blog
"If a reader wishes to learn more about this season in the Dominican Republic for three of the greatest stars of the Negro Leagues as well as the first Cuban player inducted into the American Baseball Hall of Fame, this is a good book to start that journey."—Guy Who Reviews Sports Books
“I was nineteen years old when I played with Satchel Paige in 1968. He knew my name but called me Daffy—and I was happy to let him. By then Satchel had lived one of the most extraordinary lives of our times, and Ace Smith captures his spirit with his compelling true story of the one adventure that could have ended it all, a deal to pitch in the Dominican Republic, under military watch, when losing was not an option. The Pitcher and the Dictator paints a rich portrait of one of the greatest barnstorming baseball teams.”—Dusty Baker, legendary Major League Baseball player and manager
“The Pitcher and the Dictator is a gripping account of Satchel Paige’s travels to an island run by a dictator—during which he faces the harsh obstacles of racism, power, and politics in the 1930s.”—Lance Williams, award-winning journalist and coauthor of Game of Shadows