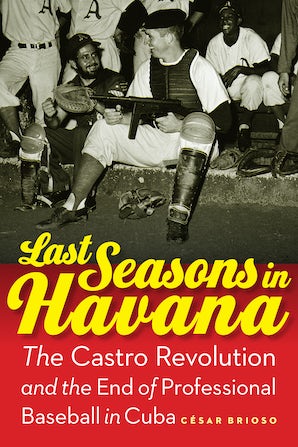 The Castro Revolution and the End of Professional Baseball in Cuba

Last Seasons in Havana explores the intersection between Cuba and America’s pastime from the late 1950s to the early 1960s, when Fidel Castro overthrew Cuban dictator Fulgencio Batista. César Brioso takes the reader through the triumph of the revolution in 1959 and its impact on professional baseball in the seasons immediately following Castro’s rise to power.

Baseball in pre‑Castro Cuba was enjoying a golden age. The Cuban League, which had been founded in 1878, just two years after the formation of the National League, was thriving under the auspices of organized baseball. Throughout the first half of the twentieth century, players from the Major Leagues, Minor Leagues, and Negro Leagues had come to Cuba to play in the country’s wholly integrated winter baseball league. Cuban teams had come to dominate the annual Caribbean Series tournament, and Havana had joined the highest levels of Minor League Baseball, fielding the Havana Sugar Kings of the Class AAA International League. Confidence was high that Havana might one day have a Major League team of its own.

But professional baseball became one of the many victims of Castro’s Communist revolution. American players stopped participating in the Cuban League, and Cuban teams moved to an amateur, state‑sponsored model. Focusing on the final three seasons of the Cuban League (1958–61) and the final two seasons of the Havana Sugar Kings (1959–60), Last Seasons in Havana explores how Castro’s rise to power forever altered Cuba and the course of a sport that had become ingrained in the island’s culture over the course of almost a century.

César Brioso is a digital producer and former baseball editor for USA Today Sports. In his twenty-five years as a sports journalist, he has written for the Miami Herald and the South Florida Sun-Sentinel. He is the author of Havana Hardball: Spring Training, Jackie Robinson, and the Cuban League.

"Last Seasons in Havana is a much-needed addition to baseball history. . . . The complete history of Cuban baseball may never be known, but Brioso has cracked open the door with some valuable information and insights."—Bob D’Angelo, Sport in American History
"Focusing on the final three seasons of the Cuban League (1958–61) and the final two seasons of the Havana Sugar Kings (1959–60), Last Seasons in Havana explores how Castro’s rise to power forever altered Cuba and the course of a sport that had become ingrained in the island’s culture over the course of almost a century."—Jason Schott, Brooklyn Fans
"In the 1950's, baseball was at the height of its popularity in Cuba, in both terms of spectator attendance and the quality of baseball played. However, once Fidel Castro overthrew Fulgencio Batista and took control of the island's government, the fate of the sport changed. These changes which led to the end of the Cuban League and the presence of minor league baseball in Cuba are captured in this interesting book by Cesar Brioso."—Lance Smith, Guy Who Reviews Sports Books
“A well-told history of the swan song of Cuban professional baseball, caught between two dictatorships, Batista’s and Castro’s.”—Roberto González Echevarría, author of The Pride of Havana and Cuban Fiestas
“Tommy Lasorda, Carl Yastrzemski, Luis Tiant, and Fidel Castro are among the cast of characters in César Brioso’s rich account of the last days of the professional game in Havana. A must-read for baseball and history fans.”—Tim Wendel, author of Castro’s Curveball and Summer of ’68
“Last Seasons in Havana is a well-researched examination of the Marxist sociopolitical upheaval that convulsed the island of Cuba in the early 1960s and altered baseball in the Caribbean for the remainder of the century.”—Lou Hernández, author of Manager of the Giants: The Tactics, Temper and True Record of John McGraw