Measles is a highly contagious, serious disease caused by a virus. Spread by physical contact or through the air, it is a leading cause of death globally among young children. Carnival of Contagion, an entertaining graphic novel about the dangers of measles, traces the adventures of a group of young adults as they enter a viral fantasy world run by a mysterious and seductive carnival barker. Illustrated by Marvel and DC Comics artist Bob Hall and including an original essay written by the award-winning science journalist Carl Zimmer, Carnival of Contagion presents a unique and fascinating story about one of the world’s most deadly viruses.

Bob Hall is a professional artist who has worked for Marvel Comics and DC Comics and drawn some of the most famous comic heroes of all time, including Batman, Spiderman, Thor, Captain America, and the Avengers. John West is a research associate professor in the Nebraska Center for Virology at the University of Nebraska–Lincoln. He manages a virology research program dedicated to understanding molecular aspects of viral gene expression as well as molecular epidemiology and antiviral immune responses. Judy Diamond is a professor and curator of informal science education at the University of Nebraska State Museum and the coauthor of World of Viruses (Nebraska, 2012). Carl Zimmer is an award-winning science journalist and columnist at the New York Times. He is the author of twelve books about science, including A Planet of Viruses.

"Lincoln comics writer and artist Bob Hall has teamed up with the University of Nebraska Museum and Nebraska research virologists to tell the story of the world's most deadly virus."—Micah Mertes, Omaha World-Herald
“In the tradition of the great superhero comics, veteran comics writer and artist Bob Hall—who has created iconic stories for Marvel and DC—now tells the true story of one of the greatest supervillains of all time: the measles virus! In Carnival of Contagion, Hall employs the visual storytelling skills he’s brought to characters like The Avengers and Batman on a powerful tale that is both entertaining and informative.”—Danny Fingeroth, longtime Marvel writer and editor and author of Superman on the Couch: What Superheroes Really Tell Us About Ourselves and Our Society 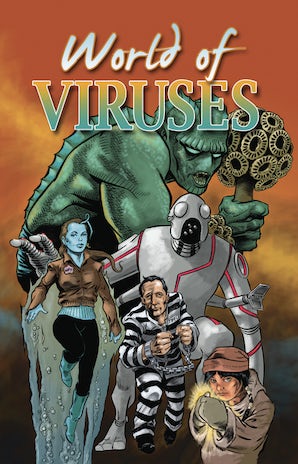