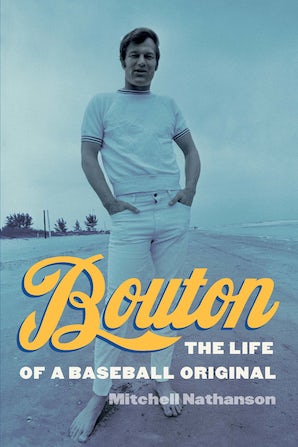 The Life of a Baseball Original

From the day he first stepped into the Yankee clubhouse, Jim Bouton (1939–2019) was the sports world’s deceptive revolutionary. Underneath the crew cut and behind the all-American boy-next-door good looks lurked a maverick with a signature style. Whether it was his frank talk about player salaries and mistreatment by management, his passionate advocacy of progressive politics, or his efforts to convince the United States to boycott the 1968 Olympics, Bouton confronted the conservative sports world and compelled it to catch up with a rapidly changing American society.

Bouton defied tremendous odds to make the majors, won two games for the Yankees in the 1964 World Series, and staged an improbable comeback with the Braves as a thirty-nine-year-old. But it was his fateful 1969 season with the Seattle Pilots and his resulting insider’s account, Ball Four, that did nothing less than reintroduce America to its national pastime in a lasting, profound way.

In Bouton: The Life of a Baseball Original, Mitchell Nathanson gives readers a look at Bouton’s remarkable life. He tells the unlikely story of how Bouton’s Ball Four, perhaps the greatest baseball book of all time, came into being, how it was received, and how it forever changed the way we view not only sports books but professional sports as a whole. Based on wide-ranging interviews Nathanson conducted with Bouton, family, friends, and others, he provides an intimate, inside account of Bouton’s life. Nathanson provides insight as to why Bouton saw the world the way he did, why he was so different than the thousands of players who came before him, and how, in the cliquey, cold, bottom‑line world of professional baseball, Bouton managed to be both an insider and an outsider all at once.

Mitchell Nathanson is a professor of law in the Jeffrey S. Moorad Center for the Study of Sports Law at the Villanova University School of Law. He is the author of God Almighty Hisself: The Life and Legacy of Dick Allen, A People’s History of Baseball, and The Fall of the 1977 Phillies: How a Baseball Team’s Collapse Sank a City’s Spirit.

“Once you start reading, you will not be able to stop. A compelling look at one of the most influential and controversial figures in baseball history. A new generation needs to know the story of Jim Bouton: a man who never wearied of gleefully and hilariously skewering the establishment but who also had the old-school drive to will his dreams into reality. Above all, a lifetime love of baseball shines through in every chapter—a true reflection of Bouton himself.”—Brian Kenny, host for MLB Network and author of Ahead of the Curve: Inside the Baseball Revolution
“Half a century after Jim Bouton’s Ball Four hilariously let the air out of Major League Baseball’s inflated self-image, one of the game’s most fascinating characters finally gets the biography he deserves. Unfettered and unfiltered, like Bouton himself, Bouton will make you laugh, make you cry, and make you wanna pound that Budweiser. To paraphrase the late, great Joe Schultz, ‘Attaway to go, Mitchell Nathanson!’”—Dan Epstein, author of Big Hair and Plastic Grass: A Funky Ride through Baseball and America in the Swinging ’70s
“For years people have told me that they fell in love with baseball after reading Ball Four. Jim Bouton was a unique character on the baseball stage, a figure of historical importance. It’s time we all knew him better, and Mitchell Nathanson’s book gets that done.”—Marty Appel, New York Yankees historian and author of Pinstripe Empire and Casey Stengel