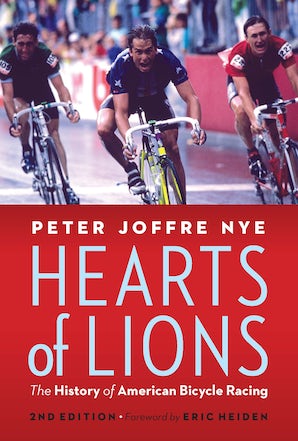 The History of American Bicycle Racing

Revised, updated, and expanded, this second edition of Hearts of Lions is based on interviews with more than one thousand cyclists whose racing careers span from 1908 through the 2016 Rio Olympics, along with interviews with trainers and family members. Included are stories about Joseph Magnani, the lone American from southern Illinois who rode on the dusty roads of Europe in road racing’s golden era of the 1930s and 1940s; Lance Armstrong, whose rise in the mid-1990s was eclipsed in the doping era that still casts a long shadow over the sport; Kristin Armstrong, a three-time Olympic gold medalist who set new standards for women in cycling; and Evelyn “Evie” Stevens, who chucked a Wall Street career in her mid-twenties to compete in two Olympics and win several world championship gold medals.

Hearts of Lions is a colorful, exciting, classic work on the art of bicycle racing over 140 years against a backdrop of social, political, and technical changes.

Peter Joffre Nye has worked as a prize-winning author, journalist, and magazine editor in Washington, DC. He is the author of several books, including The Fast Times of Albert Champion: From Record-Setting Racer to Dashing Tycoon, an Untold Story of Speed, Success, and Betrayal. His articles have been published in a variety of venues, including the Washington Post, USA Today, and Sports Illustrated. Eric Heiden is a physician and a former long-track speed skater, road cyclist, and track cyclist. He won five individual gold medals and set four Olympic records and one world record at the 1980 Winter Olympic Games.

“If there is any one book fans of cycling and American sports should read, it’s Peter Nye’s second edition of Hearts of Lions. Updated to cover the male and female cyclists who stormed the roads of Europe in the era after Greg LeMond won three editions of the Tour de France, Nye’s latest edition of the definitive history of American cycling is a must-read.”—Mark Johnson, author of Spitting in the Soup: Inside the Dirty Game of Doping in Sport
American bicycle racers were the best in the world from the early part of this century through 1940. In the 1984 Olympics and 1986 Tour de France, the Americans returned to prominence. Nye chronicles the history of American bicycle racingtrack, road, and stage races; Americans on the European circuit; and the Olympics. There's no great detail about specific eras or individuals; everything is covered in brief, journalistic style. His comments on women cyclists are insightful. Eclectic historical bibliography included. For comprehensive collections. Thomas K. Fry, UCLA Libs.
A significant contribution to American sports history, this study by a former bicycle racer reminds us that, a century ago, bike racing was the major U.S. sport. Stars earned tens of thousands of dollars a year at a time when baseball heroes were making $5000. And some of the nation's greatest technological thinkers were involved in bicycle-making, including Henry Ford and the Wright brothers. Interest in the sport peaked in the 1920s, especially as a result of six-day bike races, held all over the country, but most notably at Madison Square Garden and the Velodrome in Newark, N.J. That interest waned in the Depression and war years, when the focus of bicycle racing shifted to Europe, but the victory of American Greg LeMond in the 1986 Tour de France has revived interest in the sport in this country.