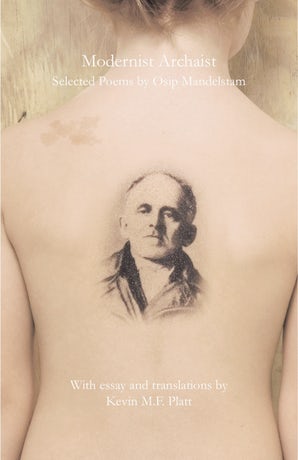 Distributed by the University of Nebraska Press for Whale and Star Press
Modernist Archaist offers a comprehensive English-language selection of Osip Mandelstam’s poetry, edited by Russian scholar Kevin M. F. Platt, who also contributes an illuminating essay. New translations by notable contemporary poets combined with an exceptional selection of previous translations are representative of the most up-to-date interpretation of Mandelstam’s work.
Osip Mandelstam (1891-1938), one of the most significant poets of twentieth-century Russian literature, also embodied more fully than any other its profound paradoxes. He was a Jew born in Poland who became a leading Russian poet. He was a committed Modernist who was nevertheless faithful to the great examples and strict forms of the past literary tradition. Most strikingly, he was a rebel and radical thinker who was ultimately hounded to death as an “enemy” of the revolutionary Soviet society. Yet while Mandelstam’s poetry bore witness to the convulsions of twentieth-century Russian culture and politics, it was by no means limited or defined by these historical contexts. In an early statement of his creative credo Mandelstam wrote: “for an artist, a worldview is a tool or a means, like a hammer in the hands of a mason, and the only reality is the work of art itself.” The poems offered in this volume, about half of them appearing in previously unpublished translations, present an overview of Mandelstam’s major works. Introductory materials include an essay on his life and poetry.

Translators: Clarence Brown is professor emeritus at Princeton University. He is author of a biography of Mandelstam and editor and translator of editions of the poet’s works. Bernard Meares is a translator who lives and works in Geneva, Switzerland. W. S. Merwin is a poet and essayist who lives on Maui, Hawaii. His most recent book is Present Company. Eugene Ostashevsky is a Russian-born American poet and editor of OBERIU: An Anthology of Russian Absurdism, containing the 1930s writings of Alexander Vvedensky, Daniil Kharms and others of their circle. Bob Perelman is a poet and critic whose most recent book is Iflife. Charles Bernstein is a poet and essayist whose most recent book is Girly Man. Both teach at the University of Pennsylvania.
Editor: Kevin M. F. Platt teaches Russian and Comparative Literature at the University of Pennsylvania. His scholarship focuses on Russian history and culture, with particular interest in poetry and poetics. He is the author of History in a Grotesque Key: Russian Literature and the Idea of Revolution and co-editor (with David Brandenberger) of Epic Revisionism: Russian History and Literature as Stalinist Propaganda.